Pacers were given extra workload as the conditions in Dharmasala is expected to help them.

Both India and West Indies team came out for practice sessions at Feroz Shah Kotla, Delhi before the fourth One-day International (ODI) at Dharmasala. With the third ODI called off due to cyclone Hudhud, both teams had a longer stay in the capital.

India were the first team to reach the ground on Tuesday. Indian players looked in jovial mood as they got an unexpected break of two days. Local boy, Ishant Sharma, who came in as a replacement of Mohit Sharma joined the team on Tuesday. The session kicked off with the football drill and continued before the players were ready to commence the net session. During the net practice special emphasis was given to death bowling. Umesh Yadav, Bhuvneshwar Kumar and Ishant Sharma were given the duties of death bowling in the nets. Fast bowlers were given extra workload in the session as the conditions in Dharmasala is expected to help the pace bowlers.

In recent times Mohammed Shami has come out as India’s prime death bowler. But MS Dhoni was unable to fine a suitable partner for him. On Tuesday’s session, Bhuvneshwar, Umesh, Ishant were tried out for the job. Mohit Sharma’s injury gave Ishant the opportunity to comeback in the ODI team. To secure his spot in the World Cup team, Ishant would be eager to give good performance in the remaining two matches of the series and if he can solve Dhoni’s death bowling problems, than his chances of selection would definitely increase.

West Indies later came to ground and did full fledged net session. According to Stuart Williams, the assistant coach of West Indies, the Caribbean side is treating the last two ODIs of the series as knockout matches and they are desperate do well. Both the teams will travel to Dharmasala on 16th October. 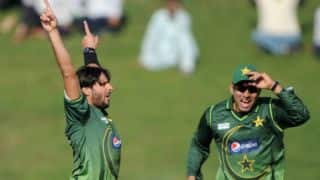