A 165-run partnership with Denesh Ramdin greatly helped the team to post the big total.

Marlon Samuels expressed his satisfaction over his sixth One-Day International (ODI) hundred after West Indies registered a comfortable 124-run victory over India in the 1st ODI at Kochi.

Samuels, who scored an unbeaten 126, helped West Indies post a mammoth total of 321 for six.  His brilliant knock also helped him become the 10th West Indian batsman to reach the 4,000 run mark. He also claimed two wickets for just 10 runs in three overs to restrict India to just 197 in 41 overs, reports Jamaica Gleaner.

“I don’t put them (hundreds) in categories so I just give thanks for another international hundred. It’s a great milestone,” Samuels said.

“Coming in and getting two quick wickets was just putting the icing on the cake. I always say scoring a hundred and getting two wickets and your team still losses, that goes down as nothing to me. But tonight we won, so I’m definitely enjoying this milestone,” he added.

Samuels came in to bat while the West Indies were at 98 for 2 in the 18th over. He started off slowy and gradually picked his pace to score 126 of 116 balls with the help of 11 fours and four sixes. A 165-run partnership with Denesh Ramdin greatly helped the team to post the big total.

“We were just talking and working out the situation. Every over we came together and worked out what we were going to do … we just took it from there and it worked in our favour and the partnership set up the game from there,” he added.

Playing his first ODI in eight months, Samuels said that he believed he could perform well as he was in quiet a good touch during the warm-up games against India A.

“I was trying not to soak up too many balls and just rotate the strike, get off the strike, get fours in between and gain that confidence, because I have been in good nick from the practice games,” told Samuel. 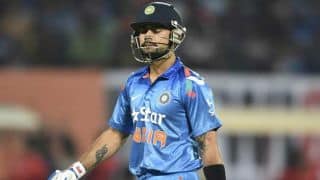 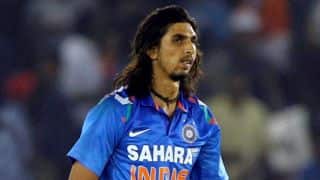