West Indies on the 3rd Day of the first Test at Antigua against India struggled throughout the day’s proceedings as the Indian bowlers wrecked havoc on the batsmen. Mohammed Shami and Umesh Yadav with 4 wickets each did not let the West Indies even cross 250-run mark as they were bundled out for 243. Leg-spinner Amit Mishra also claimed 2 wickets. Among the batsmen only Kraigg Brathwaite and the young wicketkeeper batsman Shane Dowrich managed to score half-centuries. Dowrich scored 57 off 79 balls and remained unbeaten as he ran out of partners from the other end. He struck 10 boundaries in his innings and played some fearless strokes as well. LIVE CRICKET SCORECARD: India vs West Indies 2016, 1st Test at Antigua

Brathwaite, who defied India s array of pace and spin for almost five hours in getting to 74, could not survive the first over of the second turn at the crease, being trapped palpably leg-before by Ishant Sharma. Rajendra Chandrika and Darren Bravo survived to the close and will resume on the fourth day hoping to put up a much more concerted effort than in the first innings. IND vs WI Live Streaming: Watch live telecast on Ozee.com

In their previous three Test series, the West Indies lost the opening matches at home to Australia by nine wickets a year ago and then by an innings in Sri Lanka and Australia at the end of 2015.

India’s bowlers made a mockery of all the lamentations of a placid, lifeless pitch over the first two days with an impressive, purposeful effort throughout the day.

They were held up though at the start of play as Braithwaite and nightwatchman Devendra Bishoo frustrated Virat Kohli and his men for 75 minutes until leg-spinner Amit Mishra had Bishoo stumped by wicketkeeper Wriddhiman Saha. 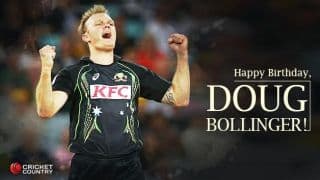