Mumbai: Australian pace bowling great Jeff Thomson has been very impressed by rookie Mumbai pacer Shardul Thakur and said he would have been disappointed had the youngster not been picked in the Indian squad for the upcoming tour of the West Indies. “Shardul has done the hard work, two years of hard work. What would have been very disappointing for me, not that I had a great deal to do with it as he’s very talented, is if he had not been picked for India. That’s [his selection] fantastic,” said Thomson on Wednesday. The 65-year-old former tearaway fast bowler, who used to terrorise batsmen around the world with his pace and aggression, is in the city to conduct the second season of the MCA-IDBI Federal Life Insurance Bowling Foundation’s coaching programme, as its head coach. Shardul Thakur advised to be aggressive in India vs West Indies 2016 by Jeff Thomson

“Shardul is as good as anyone else. If he can bowl as well as he has done here, he can clean up a lot of batsmen. Don’t be surprised if he gets a game [in the West Indies] and does better than the others,” said Thomson. Thakur, who spearheaded the Mumbai bowling attack with 41 wickets during the team’s triumphant run in the Ranji Trophy, is part of the Virat Kohli-led squad which is to play a four-Test series in the West Indies in July-August.

Thomson said after cutting its teeth last year, the bowling scheme has unearthed more talented bowlers for the May 23-June 4 second season. “We found a bit more talent this year than last [in September], especially with younger kids – 16 upwards – which is pretty young for fast bowlers. I can feel the difference over the last one year. They are so much fitter and faster. These kids are rookies picked from poor areas, not gifted with money. You got to be a little crazy to become fast bowlers, need to dislike batsmen and should be prepared to do the hard work in these kinds of temperatures. We have not even touched the tip of the iceberg,” said Thomson.

“I am not [American illusionist] David Copperfield. I don’t have a magic wand. I don’t try to change the actions of bowlers. A couple of them are like [former South African all rounder] Mike Procter, bowling off the wrong foot. The biggest thing in sport is the unknown factor. It’s the variety that makes the difference,” the Sydney-born ex-player explained.

Three Mumbai bowlers – David Mathias, Prisith Krishna and Tushar Deshpande – have been picked by the bowling foundation who will train at the Australian Cricket Academy with that country’s bowlers. Another bowler – Minad Manjrekar – has missed the chance to train in Australia as he did not possess a valid passport, it was announced. After the end of the two-week second season of coaching camp, eight fast bowlers would be shortlisted to attend a further three-week training session next month in Bengaluru with Thomson along with bowlers from Karnataka, it was announced.

“This year the team has undertaken a rigorous talent identification exercise. We are confident that the combination of great talent and legendary player [Thomson] as coach can bring path-breaking results for the Indian cricket landscape,” said IDBI Federal Life Insurance’s CEO, Vignesh Shahane. “The Foundation played its part in Mumbai’s success story this season in Ranji Trophy, in Irani Cup where it dominated for four of the five days of the game and in the under 19 tournament,” he added. 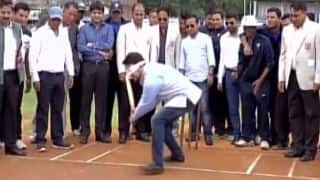 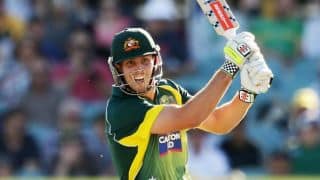