Both teams will want to get off to a good start in Day 1, which will set the tone for the rest of the match.

India take on West Indies in the second Test at Kingston, Jamaica. India won the first Test at Antigua by an innings and 92 runs to go 1-0 up in the four-match series. Virat Kohli scored his maiden Test centuy at Antigua and along with Ravichandran Ashwin (113) took the match away from the West Indies. India scored a mammoth 566 for 8 in the first innings and did not have to bat again after that. West Indies folded cheaply in both innings, giving India a big win. That was India s biggest win outside Asia as well. West Indies will look to bounce back in the second Test. FULL CRICKET SCORECARD: India vs West Indies 2016, 2nd Test at Kingston

India were dealt with a blow ahead of the second Test. Their star opening batsman Murali Vijay will not feature in the match due to a thumb injury. Vijay sat out most of the first Test after he was struck o the hand by a Shannon Gabriel bouncer. KL Rahul is most likely to take Vijay s place and will open with Shikhar Dhawan, who scored 84 in the first Test. Rahul has been in fantastic form of late and will look to carry it on into this match as well. READ: India vs West Indies 2016, 2nd Test at Kingston: Preview

As far as West Indies are concerned, they have added the young Alzarri Joseph in their squad. Joseph was playing in the Caribbean Premier League (CPL) 2016 for St Nevis & Patriots before he was called up into the Test squad for West Indies. The squad otherwise remains the same for the hosts. 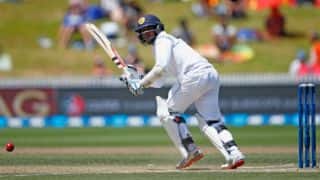