At the end of day during which Virat Kohli scored his 24th Test century – which put him second to Sir Don Bradman in terms of innings needed – and Ravindra Jadeja gleefully biffed his way to a maiden one to drive India to a mammoth 648/9 declared, a floundering West Indies found themselves staring at an embarrassing defeat at Rajkot.

Having been run ragged as India pounded out their seventh 600-plus score at home in the past three years, West Indies quickly fell to 7/2 with Mohammed Shami on fire with the new ball. The rot had begun, and by stumps the visitors were 94/6 – behind by the small matter of 555 runs. Click here to read more 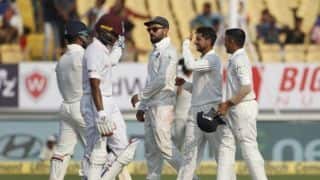 India vs West Indies 2018, 1st Test, Day 3 LIVE Streaming: Teams, Time in IST and where to watch on TV and Online in India