Selection choices will be the talking point for both teams when India take on West Indies in the first Test in Rajkot from October 4, a venue known for being notoriously batsmen-friendly.

Selection choices will be the talking point for both teams when India take on West Indies in the first Test in Rajkot from October 4, a venue known for being notoriously batsmen-friendly.

India, ranked No 1 in Tests, are coming off successive overseas series defeats and the look of their squad for the two-Test series versus West Indies is significantly different with Shikhar Dhawan, Dinesh Karthik and Karun Nair dropped, Ishant Sharma out injured and Bhuvneshwar Kumar and Jasprit Bumrah rested. A very demanding four Tests lie ahead in Australia, and after the batting failures in England – where Virat Kohli s team lost four of five Tests – there is a desperate need to address this issue. How India can gain for Australia with two matches against West Indies is debatable, but the fact that fresh faces have been added to their squad indicates that places are up for grabs.

For eighth-ranked West Indies, led by Jason Holder, this is a return to Test cricket after nearly three months. Holder, a veteran of this squad at 26, believes these two Tests versus the top-ranked team will be a good test of where West Indies are at after drawing with Sri Lanka 1-1 and beating Bangladesh 2-0 at home this year. Their task has been made tougher with confirmation from outgoing coach Stuart Law that Kemar Roach will miss the first Test, which leaves Holder and Shannon Gabriel as the most experienced fast bowlers and the uncapped Sherman Lewis and one-Test-old Keemo Paul as the third option.

India vs West Indies has over the past decade become a fairly low-profile series, particular in India where the hosts have regularly dominated. This series, despite India being somewhat depleted, promises to be along similar lines.

Weather: Sunny with a high of 39 degrees

With Dhawan and Vijay dropped, the stage is set for Prithvi Shaw to become, at 18, India s youngest Test debutant since Ishant Sharma in 2007 and open alongside KL Rahul. Hanuma Vihari, who made a haff-century on his Test debut in England misses out from the team of 12 that was announed on the eve of the first Test. Uncapped Mayank Agarwal will have to wait a bit longer for a Test debut.

Aged 18, Prithvi Shaw could open the batting with KL Rahul at Rajkot. @Getty

Fitness concerns were hanging over R Ashwin – he pulled out of the ongoing Vijay Hazare Trophy – but the off spinner is part of the squad for the 1st Test. Ravindra Jadeja and Kuldeep Yadav are the others spinners. Jadeja will be a shoe in at his home ground after a fine fifth Test display in England. That leaves India to pick three pace bowlers. Mohammed Shami is a certainty, Umesh Yadav should walk into the XI after warming the bench in England and Shardul Thakur may get his Test cap if India opt for three pacers and two spinners attack. This means Kuldeep Yadav could miss out.

Sunil Ambris has made a strong case for selection at Rajkot with an unbeaten 114 in the drawn tour match against the Board President s XI. With Roach away on bereavement leave, West Indies will need to pick from Lewis, a late inclusion after Alzari Joseph s withdrawal, and the allrounder Paul who played the last Test with Bangladesh when Roach was rested. Devendra Bishoo will be the specialist spinner.

– Holder managed a solitary wicket during the last series against India in 2016, at an average of 239.

– Rajkot has hosted one Test, between India and England in 2016, which was drawn.

India is the No.1 Test team. They have played some good cricket despite their last series (against England). It will be a good test for us. We have to just focus on the two Test matches. – Holder

“We are not taking West Indies lightly, but our focus is on trying to improve our performance as a team. Rather then looking at the opponent, our goal is to play good cricket.” – Ajinkya Rahane 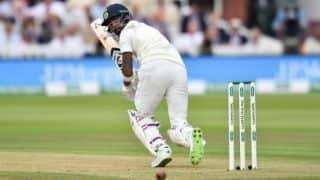 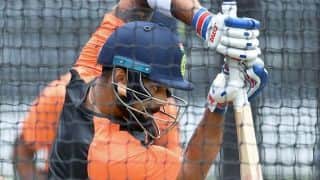