West Indies were 82/3 at tea, with Darren Bravo and Roston Chase batting on 18 and 10 respectively.

Mohammed Shami, Ishant Sharma and Ravindra Jadeja scalped a wicket each as India reduced West Indies to 82/3 at tea on day two of the first Test at the Sir Vivian Richards Stadium, North Sound in Antigua on Friday.Darren Bravo and Roston Chase were batting on 18 and 10 respectively.

John Campbell was on a roll as West Indies were off to a flying start but Shami s introduction into the attack gave India their first breakthrough as the Indian pacer dismissed Campbell after the West Indian dragged one back onto the stumps.

After conceding some easy runs at the start, Indian pacers pulled back the things to stem the flow of runs.

Ishant then struck for the first time in this match as he held on to a fine return catch on his own bowling to end Kraigg Brathwaite s innings. The right-hander got out for 14.

Jadeja, who had earlier scored 58 to take India to 297, added to the hometeam s woes as he dismissed Shamarh Brooks before the tea break. The debutante perished for 11 as Ajinkya Rahane took a catch on the rebound, after the ball ricocheted off Rishabh Pant’s pads.

Earlier on Day two, India lost Rishabh Pant cheaply. Pant perished in the third over of the morning as India resumed second day s play at 203/6. The wicketkeeper-batsman could only add four runs to his overnight score and got out off Kemar Roach s bowling.

But Jadeja and Ishant denied West indies any immediate success as the two put up a 60-run partnership. While West Indies pacers managed to test Ishant and Jadeja on a few occasions, the two stayed put to bring up a fifty-run stand, taking India past 250-run mark. Although Jadeja did not opt for an all-out attack approach, he cashed in whenever there was any opportunity to get some runs.

However, their stand was broken as Shannon Gabriel dismissed the Indian pacer for 19. Mohammed Shami fell soon after as Roston Chase scalped his second wicket, removing Shami for a duck.

India were nine down with Shami s fall and Jadeja then opened his shoulders and on his way, brought up his fifty. While India could not go past 300-run mark, the pair of Jadeja and Bumrah added 29 runs for the last wicket, taking India to 297.

While Roach was the pick of the West Indies bowlers and returned with four wickets, Shannon Gabriel scalped three wickets. 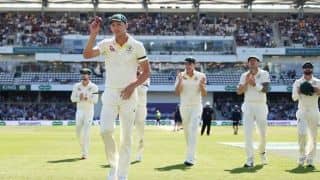