Chasing a 419-run target, West Indies were bowled out for 100 as India won the series opener by 318 runs with a day to spare.

Chasing a 419-run target, West Indies were bowled out for 100 as India won the series opener with a day to spare. Bumrah, who had only one wicket against his name in the first innings of the Test, scalped as many as five wickets in the second innings.

Ishant Sharma, who had completed his ninth five-wicket haul in the first innings, and Mohammed Shami scalped three and two wickets respectively as India completed the demolition job and registered their fourth-largest win, by runs, in the longest format of the game.

Bumrah set the ball rolling in his first over as he removed Kraigg Brathwaite after the right-hander poked at an away-going delivery. The right-arm pacer followed it up with a fast inswinger which disturbed the timber and sent John Campbell packing.

Ishant, who had scalped five wickets in the first innings, added to the West Indies woes as he trapped Shamarh Brooks before the wickets before removing Shimron Hetmyer. The left-hander had a life in the innings after Virat Kohli had dropped him in the previous over but failed to make the most of that opportunity.

Bumrah then added one more wicket to his tally as he broke through Darren Bravo s defence to leave West Indies reeling at 15/5 at tea. He continued to make merry in the final session on day four, adding two more wickets to his account – Shai Hope and Jason Holder – to complete a five-wicket haul.

While Kemar Roach and Miguel Cummins put up a fifty-run stand for the final wicket to take West Indies to the three-figure mark, Ishant dismissed the former to seal India’s win.

Earlier, after Ajinkya Rahane s hundred and Hanuma Vihari s 93, India declared their innings at 343/7 as soon as the latter was dismissed for by West Indies skipper Jason Holder.

The day began on a bright note for the hometeam as Roston Chase removed Virat Kohli in the second over. However, Rahane and Vihari denied West Indies any success till lunch. The two added 135 runs together before Rahane, who followed up his 81-run knock with a second-innings hundred, got out for 102 off Shannon Gabriel.

Rishabh Pant had a license to go for his shots with India eying declaration but he could only score seven before Chase struck for the fourth time in the innings. 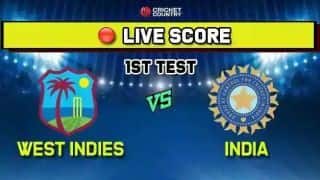