Holder said his bowlers will have to be consistent as they look to challenge India's famed batting line-up.

West Indies skipper Jason Holder expects ‘Universe Boss’ Chris Gayle to come good against India in the second ODI which will be his 300th match, the most by a West Indian.

Gayle can also overtake Lara’s record for the most ODI runs (10,405) by a West Indies batsman. He requires just nine runs to overhaul Lara’s total runs.

“Three hundred games is a lot of games. Some of us in the dressing room can’t even imagine that. We just hope he can get us off to a really good start,” Holder said.

Gayle struggled in the abandoned first ODI, scoring 4 from 31 deliveries but his opening partner Evin Lewis put up a good show, scoring an unbeaten 40 off 36 balls before the match was called off due to rains. “Definitely happy to see Evin get some time in the middle,” Holder said.

“He didn’t get the runs he was looking for in the T20 format but it’s good to see him get into form in Guyana and hopefully he can transfer that performance here as well.”

Early wickets affected West Indies’ campaign during their 0-3 loss against India in the T20Is. “I think in the past we have let ourselves down in having a foundation,” Holder said.

“It’s just a matter for us to take a few balls at first and get ourselves set and then we take it as the innings goes on.”

Holder said his bowlers will have to be consistent as they look to challenge India’s famed batting line-up. “We got to put pressure (on the batsmen) and try to get as deep into their batting line-up (as possible),” he said.

ALSO READ: I am very thankful that I am playing this 300th match: Chris Gayle

“The wickets nowadays are very good for batting. It tends to play a little bit more in the batsmen’s favour, (but) we’ve been doing a really good job, especially in the World Cup I thought our bowlers did a great job, and (we’ll look to) just continue from there and just try to be consistent.”

Talking about pitch at the Queen’s Park Oval, Holder said: “It’s normally pretty humid. The wicket is a decent one, hopefully the rain stays away and it doesn’t get too soggy. The pitch normally is a very good pitch.

The conditions should be really good. We’ve got to see how the pitch plays, but ideally in one-day cricket, 300 runs is the benchmark. We’ll see how it all plays out.” 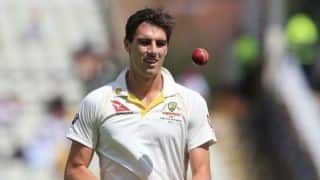