Former West Indies skipper and one of the finest batsmen to have ever graced the game, Brian Lara, congratulated Chris Gayle, who became the highest run-getter for West Indies in ODIs and the first West Indian cricketer to play 300 ODIs.

The 39-year-old, who needed 7 runs to go past Lara, surpassed the West Indies great with a single down to third man during the second one-day international against India at the Queen’s Park Oval, Port of Spain in Trinidad on Sunday. Gayle eventually was out for 11, out LBW to Bhuvneshwar Kumar and took his tally to has 10353 runs.

Gayle also went past Lara to become the highest run-getter in ODIs for West Indies. The left-handed batsman had missed out on an opportunity to go past Lara in the washed-out first ODI against India in Guyana on Thursday, managing just four runs off 31 deliveries before being cleaned up by Kuldeep Yadav. While he fell for 11 in the second ODI, he managed to go past Lara.

Gayle said he was thankful that he was playing his 300th ODI while speaking with Darren Ganga ahead of the second ODI against the Virat Kohli-led India.

ALSO READ: I am very thankful that I am playing this 300th match: Gayle

It is a great achievement to play 300th ODI. When I look back, I say, could I make 300th ODI and I am very thankful that I am playing this 300th match. I enjoy playing this format without a doubt, I enjoyed batting with you (Darren Ganga) too. I have made the quick adjustment from T20s to ODI. Both teams are even-steve, hopefully, we can get a win, said Gayle. . 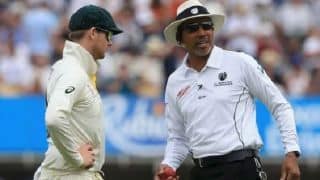