West Indies batsman Rovman Powell was left to rue what could have been after India sealed the three-match T20I series on Sunday.

West Indies batsman Rovman Powell was left to rue what could have been after India sealed the three-match T20I series winning a rain-affected second match on Sunday in Florida.

READ: Is India vs West Indies the new India vs Sri Lanka?

Chasing 168, rain interrupted West Indies chase in the 16th over with the scorecard reading 98/4. The match didn’t resume and India were declared winners via DLS method.

Powell ended as West Indies’ top-scored with a brisk 54 off 34 and was the fourth wicket to fall before rain-interruption. Despite India’s win, Powell felt had the rain not played spoilsport, West Indies could have made a contest out of it and maybe even emerge as the winners.

“I think we had sufficient wickets in hand,” Powell said on Sunday. “We had Kieron Pollard and [Shimron] Hetmyer at the crease, and Carlos Brathwaite and Keemo Paul to come in. I think those are guys that could have brought it to them. I guess in the end India are runaway winners but we don’t look at it and say we were far behind.”

In the first T20I, West Indies managed 95/9 after being put in to bat on a tricky wicket at Lauderhill. In reply, India lost six wickets before overhauling the target.

However, Powell noted that the surface was better to bat on during the second match and there was a real chance of West Indies winning the match despite the position they were in. “I think the wicket was a little bit better. It came onto the bat a little more. It didn’t spin as much or it wasn’t as slow as yesterday. As a team, I just thought we were an over behind. If the game had finished, we probably would have won or come very close,” the 26-year-old said.

He added, “What we will say is that the team that is heading to Guyana, we’re looking to put our best foot forward. We think this Indian team is beatable and it’s just for us to string together good performances to show people that.”

The series now shifts to Guyana where the third and final match will be played on Tuesday. 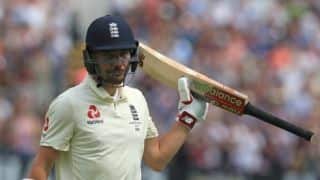