On comeback to the Indian team, Dhawan managed 27 runs in three T20I innings.

Virat Kohli is not worried about Shikhar Dhawan‘s lack of runs since he returned to the Indian cricket team for the three T20Is against West Indies, instead backing the opener to succeed in the format he has done best in – ODIs.

Dhawan fractured a thumb during his century against Australia at The Oval on June 9 and was subsequently ruled out of the World Cup. He returned to India and was rehabilitated at the National Cricket Academy in Bangalore, after which the BCCI selectors recalled him for the tour of the West Indies.

Dhawan played all three ODIs – two in Florida, one in Guyana – and managed 27 runs. On Tuesday, during the final T20I, Dhawan pulled a short ball from Oshane Thomas to short fine leg. This dismissal for 3 came after he was bowled by Keemo Paul for 23 on Sunday and trapped lbw by Sheldon Cottrell for 1 the day before.

Asked about Dhawan’s poor run, Kohli did not appear worried ahead of the ODI series against West Indies starting Thursday.

“He’s a very experienced player … T20 cricket, we don’t really look too much guys are doing in terms of form and stuff like that,” said Kohli. “It’s a format where you need to get on with the game and you will get out at some stage. 50-over cricket gives you a lot more time to get into your innings and I think once he gets some time out there in the middle, we all know the skill sets that he has and the way he can bat. So not concerned at all.” 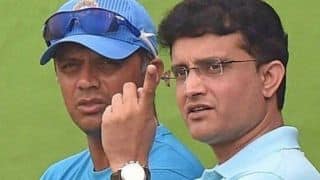 Ashes 2019: 'He's got a bit in the bank' - Struggling Jonny Bairstow gets Test lifeline from Trevor Bayliss