Gautam Gambhir feels that West Indies will give themselves a better chance at beating India should they prepare tracks that support their fast bowlers.

Gautam Gambhir feels that West Indies will give themselves a better chance at beating India should they prepare tracks that support their fast bowlers.

West Indies finished ninth among the 10 teams who participated at the ICC Cricket World Cup 2019. And they have started their post-world cup journey suffering a 3-0 clean sweep in a three-match T20I series.

Gambhir has advised the hosts to not fear India pace attack and not dish out pitches which are more suitable for batting. “If I put myself in the WI camp, the first thing I would do is to make fast, bouncy wickets for all three formats,” Gambhir wrote in his column for The Times of India. “Yes, India have more than a decent pace attack but if the hosts are to have any chance at all, it is on good fast wickets. Right now they are dishing out batting pitches, which is exactly what India want.”

Gambhir further said that India will continue to remain the favourites for the ongoing ODIs and the Test series that follows. “India have pocketed the T20I series against the West Indies and are favourites to do the same in ODIs and Test matches too. It is not their fault if West Indies don’t get their act together,” he said.

The first ODI of the three-match series was washed out after 13 overs of play. India and West Indies now square off in Porta of Spain for the second ODI today and will hope for an unassailable lead.

The third and final ODI will also be played at the same venue on August 11. 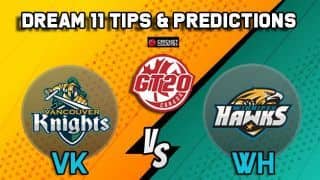 Dream11 Team Bangladesh U19 vs India U19, Final, U-19 Tri-series– Cricket Prediction Tips For Today’s match BN-Y vs IN-Y at Hove