India captain Mahendra Singh Dhoni on Sunday said heavy dew played a crucial role in his team's two-wicket loss against West Indies as the bowlers struggled to even grip the ball in the second one-dayer at Visakhapatnam. 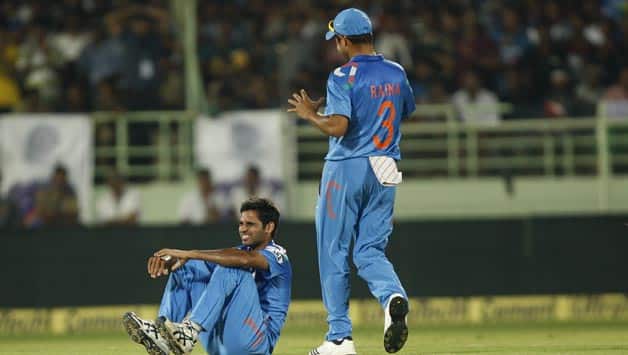 India captain Mahendra Singh Dhoni on Sunday said heavy dew played a crucial role in his team’s two-wicket loss against West Indies as the bowlers struggled to even grip the ball in the second one-dayer at Visakhapatnam.

“There was a lot of dew, was difficult for bowlers to even grip the ball, let along putting it in right areas. When we went into bowl, there was plenty of dew and it kept getting worse,” Dhoni said at the post-match presentation ceremony.

India had put on a challenging 288 for seven on a slow track at the ACA-VDCA Cricket Stadium but Darren Sammy produced a game-changing unbeaten 63 to help the visitors chased down the total and level the three-match series 1-1.

Dhoni said he could not blame his bowlers for not being able to defend a 289-run target because it was difficult to grip the wet ball.

“If there was no dew, 289 was 400-odd on this pitch with so much turn and bounce. It was difficult for bowlers with so much dew,” he said.

Dhoni, however, lauded his bowlers for taking the contest to the last over.

“To take it to the last over was a superb bowling effort. The spinners did really well,” he said.

His West Indian counterpart Dwayne Bravo was all smiles after the win and praised his middle-order batting for taking the game away from India.

“It’s great team effort. Well done to young Kieran Powell, Lendl Simmons and Darren Sammy. I got out at a crucial time. Our aim was for one of the top five batters to bat through the innings. We had four half-centuries today, so that was good. It was a must-win game for us,” he said.

Bravo said once they restricted India under 300, they backed themselves to chase the target.

“We planned out very well. We communicated well on the field. The bowlers did their job, we fielded well, our batsmen got into fifties. We backed ourselves to chase,” he said.

Man-of-the-match Sammy thanked the team management for keeping faith in him after his disastrous outing as a skipper in the two-match Test series, which India comfotably won 2-0.

“I must thank my team-mates for giving me another opportunity. It must have been difficult to do that, seeing how the series has gone for me. Simmons and I communicated well. We backed ourselves to get 90-odd in the last ten overs. Once I am hitting the ball nicely, it was always good for me. Good to contribute in a crucial game,” he said.