The first ODI between India and West Indies produced no result due to persistent rains.

Rain acted as boon for some and played spoilsport for others in the series opener between India and West Indies at Port of Spain, Trinidad. With the atmosphere remaining dull and a widely-followed Indian cricket team being greeted to empty stands, the first ODI had nothing significant attached to itself. Nonetheless, India tinkered with their line-up by handing a debut to chinaman Kuldeep Yadav and Ajinkya Rahane-Shikhar Dhawan made amends of a below par West Indies bowling attack before rain ruined proceedings. With no changes in venue for the second match, spectators and viewers remain in two minds whether to give this series a miss altogether with weather gods’ persistent presence and one-way contest in favour of tourists.

India remained flawless with the bat. After their batsmen’s impressive show in ICC Champions Trophy, they continued to make merry in Caribbean conditions. Dhawan commenced from where he left in the marquee event and got valuable support from Rohit Sharma’s replacement in Rahane. The pair brought up their respective fifties (first such instance of Indian openers registering half-centuries in West Indies) and recorded the highest opening stand of 132 runs in Caribbean soil. It would have been ideal for Rahane to add three figures to his score, but he fell for 62.

Just when India looked to up the ante in the death overs, rain ensured no further play. India would have wanted their lower order to get a look-in since they have warmed the benches for long in recent past. However, for that to happen, West Indies will have to come up with some plans and initiate breakthroughs. They appeared clueless, their body language was lethargic and looked content in curbing the run flow rather than going for wickets. A line-up, like India’s, won’t give them much chances and the hosts will have to be on their toes on Sunday.

The wicket will continue to remain sluggish and on the slow side. Ravichandran Ashwin may get another run along with Kuldeep. West Indies’ inability to play spin, chase down totals and produce wicket-taking deliveries will determine the outcome of the contest. For now, West Indies remain no match to the Indians. The likes of Jason Holder, Jason Mohammad, Roston Chase and Shai Hope will have to take responsibility with the willow, whereas Shannon Gabriel’s absence will continue to hurt them in the bowling arsenal.

Devendra Bishoo will spearhead the spin attack and will look for more support from Ashley Nurse. It will be interesting to see whether West Indies come up with the same line-up after rain-abandoned opener, or will add more depth in bowling. Honestly, they don’t have much experience and will have find a way to use their ‘resources’ judiciously.

India would go with the same XI unless an injury leads to a forced change.

West Indies do not have much options and will have to play attacking cricket in order to pose a threat to the visitors. 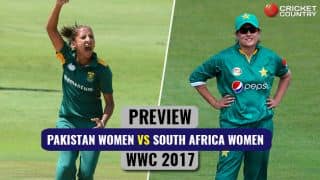