In hot and humid conditions, Virat Kohli scored his 42nd ODI century – his first in 12 innings, but perhaps a bigger gain was Shreyas Iyer capitalising on his first outing for India in the Caribbean with his third half-century. Iyer and Kohli’s 125-run partnership formed the backbone of India’s competitive total of 279/7, even though they did choke towards the end with West Indies picking up 3 in 43 in final seven overs.

Kohli’s century-stand with Iyer arrived after he and Rohit Sharma had added 74 important runs for the second wicket after Shikhar Dhawan was gotten rid of cheaply. Sheldon Cottrell rapped Dhawan on the pads, but after Nigel Long’s original decision was not out, West Indies took a review in the nick of time. The replay showed the ball hitting the middle stump and India were jolted three balls into their innings.

Kohli started off with three crisp boundaries in his first 11 balls. The first was a punch through the covers but as Kohli settled into a more free-flowing groove, his silken wrist work and bottom hand came to the fore. Rohit struggled to get going – it took him 11 balls to get off the mark – and even though the opener flicked Jason Holder to mid-wicket and Oshane Thomas down the ground, he fell to a loose shot to Roston Chase

The offspinner pulled things back, bowling a testing line and length to India. Chase bowled 10 consecutive dot balls to Rishabh Pant and the young wicketkeeper batsman, promoted at No. 4 ahead of Iyer, lost patience and was cleaned up by Brathwaite playing a reckless shot. Two wickets in quick succession spurred West Indies to stage a comeback but Kohli and Iyer ensured India marched on.

Kohli looked in imperious nick – the kind of knock one would associate with the India captain. The timing was immaculate and the rotation of strike, spot-on. Milking singles, Kohli reached his half-century of 57 balls. Iyer at No. 5 proved a smart tactic for India. He briskly moved to 22 off 18 with three boundaries including a picture-perfect lap shot. Kohli spoiled Chase’s final over by drilling him down the ground even though the offspinner managed to churn out a tidy 1/37. During the knock, he surpassed Sourav Ganguly as the second-leading run-getter for India on ODIs.

With a single down the ground, Kohli brought up his hundred off 112 balls and went for the charge. He slammed Cottrell towards mid on, Holder over extra cover for a spanking six and smacked three boundaries off Thomas as the innings entered its last ten overs. Kohli and Iyer collected a few boundaries behind square. With wet towels wrapped around their necks, signs of weariness was visible and a tired shot from Kohli led to his dismissal when he top edged Brathwaite to Kemar Roach at long-on.

Iyer took 49 balls to reach his third ODI fifty before rain halted play and resulted in a loss of approximately half an hour. However, once the innings resumed, India lost steam with West Indies returning strongly in the death. Iyer picked the bones out of a Roach delivery and sent it sailing into the second tier, but was done in by Holder, to whom he walked too far across the stumps and lost his leg stump. Kedar Jadhav was run out while trying to sneak a single before Bhuvneshwar Kumar gave Brathwaite his third. 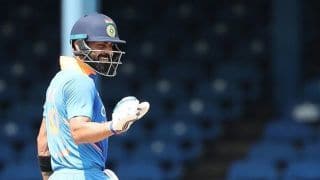 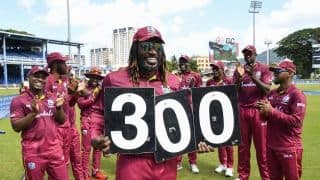