Indian skipper Virat Kohli is just 25 runs away from becoming the first Indian cricketer to score over 1000 T20Is at home. After his stellar 94 – career-best in T20Is – in the 1st T2oI in Hyderabad against West Indies, Kohli now has 975 T20I runs at home and he could become the become the third player to have scored 1000 T20I runs at home, during the second T20I at the Greenfield Stadium, Thiruvanathapuram on Sunday.

Overall, New Zealand’s Martin Guptill (1430) and Colin Munro (1000) are the only two players who have acheived the feat.

Kohli’s match-winning knock of 94 not out also puts him in touching distance of Rohit Sharma – the current highest run-getter in the format. Kohli is just three runs short of Rohit Sharma’s tally of 2547 for most runs in the format. Sharma has got out for only eight runs in the 1st T20I and a failure again in the 2nd T20I could mean he may lose out on the top spot to his skipper.

After tasting defeat at the hands of India despite scoring over 200 runs, West Indies will be keen to do better and keep the series alive. The match starts 7: 00 PM IST and even though there is cloud cover for the day, it is expected to clear out closer to match time.

This will be the second match hosted at the Greenfield stadium, after India played New Zealand in a T20I in 2017. However, it was a run-curtailed match with eight-over-per-side-game, which was won by India. 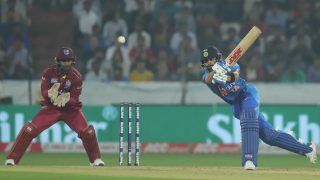 India vs West Indies, 2nd T20I, LIVE Streaming: Teams, Time in IST And Where to Watch on TV And Online in India on December 8 at The Greenfield Stadium, Thiruvanathapuram