Hello and welcome to our live coverage of Day 3 of the second Test between India and West Indies at Kingston, Jamaica on Saturday.

Jasprit Bumrah claimed just the third hat-trick by an Indian in Test cricket as the West Indies were left in ruins at 87/7 on the second day of the second and final Test at Sabina Park on Saturday. India had earlier racked up 416 all out in their first innings in Jamaica.

Bowling with sustained pace and moving the ball through the air and off the seam, the 25-year-old fast bowler continued his devastating form of the last day of the first Test in Antigua a week earlier, when he took five wickets for just seven runs, snaring six for 16 off 9.1 overs. It was a phenomenal effort interrupted by cramp in his right leg which forced him to leave the field briefly.

However, all the real discomfort was felt by the home side’s batsmen, and especially the trio of Darren Bravo, Shamarh Brooks and Roston Chase, who were dismissed off successive deliveries for Bumrah to join spinner Harbhajan Singh and left-arm pacer Irfan Pathan as the only Indians to take Test hat-tricks.

Bravo was caught at second slip and Brooks palpably leg-before. However it required a television review from Indian captain Virat Kohli to confirm Chase’s dismissal after on-field umpire Paul Reiffel had turned down the lbw appeal. Bumrah had already dismissed John Campbell and then added the other opener, Kraigg Brathwaite, after the hat-trick accomplishment.

He also returned after treatment for cramp and with his very first delivery back into the attack removed West Indies captain Jason Holder, leaving debutants Jahmar Hamilton and Rahkeem Cornwall to survive to the close of play. Any hope of Bumrah taking all ten wickets in the innings had ended when Mohammed Shami terminated the streaky innings of Shimron Hetmyer by bowling the left-hander for 34.

Hanuma Vihari had earlier completed his maiden Test hundred as India extended their first innings to the tea interval. On an afternoon of milestones, Vihari was last out for 111 to Holder, giving the home skipper his 100th Test victim and also allowing the fast-medium bowler to achieve his third five-wicket haul in as many Test innings at the ground.

Yet as well as Vihari played through five hours at the crease in which he faced 225 deliveries, striking 16 boundaries, he was actually overshadowed in an eighth-wicket partnership of 112 by Ishant Sharma who reached his first Test half-century. He was eventually dismissed for 57 as the home side laboured for most of their time in the field on another blistering afternoon.

Dismissed for 93 on the last day of the first Test a week earlier in Antigua, Vihari would not be denied on this occasion as the hosts wilted in the middle passage of the day’s play. However as assured as he was for most of his time in the middle, the 25-year-old right-hander still needed more than just a little luck to survive on a challenging pitch in a testing morning session.

Once again it was Holder who led the bowling effort for the West Indies with figures of five for 77 off 32.1 overs. He received good support from Cornwall, the burly off-spinner claiming three for 107 off 41 consistent overs. Cornwall should have also had the all-important wicket of Vihari but Campbell could not hold on to the opportunity diving full-length to his right at slip.

On 68 when he benefited from that let-off, Vihari was then thankful to be reprieved by technology ten runs later as an lbw verdict against him off Holder was reversed. West Indies were made to pay dearly for those opportunities lost as Vihari and Sharma piled on the runs after lunch. They were eventually separated with the tea interval beckoning as Sharma miscued an attempt to heave part-time bowler Brathwaite over the midwicket fence.

Virat Kohli and Mayank Agarwal stood out with half-centuries for India against West Indies on Day 1 of the second Test in Jamaica. Their fifties – raised up at either end of the second session – helped India overcome a stutter, after which a crucial stand between Rishabh Pant and Hanuma Vihari saw the hosts through stumps, at which point the score read 264/5.

Jason Holder bowled like a dream. In fact, it was because of him that Kohli and Agarwal could not convert their fifties into hundreds. Rahkeem Cornwall was another success story. The debutant made the occasion even special, by being part of three dismissal – two catches and a maiden wicket: of Cheteshwar Pujara. And yet, India would feel they have their nose ahead, just by that much with Pant and Vihari playing some fluent strokes.

With patches of grass, Holder had no second thoughts about fielding in a bid to repeat produce to repeat of Antigua, and even although it wasn’t as rewarding as the first spell, West Indies did not make life easy for India’s top order. KL Rahul struck a couple of handsome boundaries in the first over from Kemar Roach and Agarwal did the same to Shannon Gabriel.

Holder brought himself and started with a wicket maiden – Rahul squared up with a good length delivery and edging for Cornwall to take his first catch, at first slip. The stand between Pujara and Agarwal crawled – India scored 14 in the next ten over before Cornwall had his moment under the sun. The big guy bowled slightly off and Pujara, rocking on the backfoot chopped to Shamarath brooks at backward point.

Kohli batted with fluency. After an attritional first session, two familiar names – Kohli and Ajinkya Rahane came together to put India back on track with the session brining 85 runs for the loss of one wicket. After crawling to 5 off 30 before lunch, Kohli was helped by a Gabriel half-volley which he gleefully flicked for his first boundary. Cornwall was slapped through point and so was Holder. A struggling Gabriel was Kohli’s biggest gain, who repeatedly offered the India captain freebies which was dually punished. Four off his seven boundaries came off Gabriel, including the one that took him one short of a half-century.

Agarwal grew in confidence during a tough opening session. It took him almost 10 overs to score his third boundary – a juicy half-volley from Cornwall down the ground. It was followed by an attractive off drive through mid-off off Holder. Next up, Cornwall dropped it short and it was cut through backward point. Agarwal resumed proceedings post lunch with a couple of streaky boundaries, one an inside edge for four and other through the slip cordon that brought up his half-century.

In the next over, Roach seemed to have provided the breakthrough with the umpire adjudging Agarwal out caught behind before a review saved him. However, the next over, Agarwal was goaded into trying to cut a ball that was too high and close to his body to cut. Roston Chase troubled Rahane initially. A cut fell just short of the fielder at point and the ball almost rolled back on to the stumps after Rahane prodded forward to defend. It was Gabriel who allowed India’s vice-captain to get moving and together with Kohli, Rahane had added 42 important runs. But first over after tea, he nicked Roach to offer Jahmar Hamilton, another debutant, his first catch in Test cricket.

Kohli kept India motoring along. He took Cornwall for three boundaries in seven balls, and a 26th ton looked imminent before Holder bowled a fine delivery outside off, inducing a nick from the India captain. At 202/5, with Holder in the middle of a sharp spell, India looked dodgy, but Pant and Vihari settled nerves and batted with patience. Pant swatted Chase for six, and a couple of boundaries off him but was mostly kept quiet and indulged in a little battle with Cornwall bowling round the wicket to him.

Vihari looked the more confident of the two, striking the ball with tremendous control. He drove Gabriel down the ground for a couple of boundaries in the 85th over and even with the second new ball responded well to Roach, who was bringing the ball back in. Vihari flicked two boundaries in the final over of the day to remain unbeaten eight shy of a third half-century in Tests. Once in a lifetime talent: Twitter pays tribute to Jasprit Bumrah after picking up maiden Test hat-trick 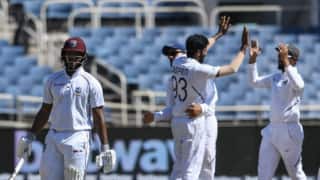 We have to work on our batting: West Indies coach Floyd Reifer