India vs West Indies, 2nd Test: It was a silly shot to get out: Prithvi Shaw

India vs West Indies, 2nd Test: It was a silly shot to get out: Prithvi Shaw
By CricketCountry Staff

Teenager Prithvi Shaw continued to impress with his ultra aggressive stroke play that fetched him 70 off just 53 balls on day two of the 2nd Test against West Indies at the Rajiv Gandhi International Stadium, Uppal, Hyderabad on Saturday.

But his dismissal, trying to hit a loopy one from spinner Jomel Warrican that ended at the hands of short extra cover, showed his inexperience. the in the previous ball Shaw had driven a full toss for four and he again went for a drive of a length delivery to the pitch of which he could get to. But, for the 18-year-old, it was just a silly shot.

“I can’t brood about this dismissal, I will start from zero once again, it was a silly shot which I will try to avoid in the next innings, will not try to do differently in the next innings,” said the opener on the dismissal after the end of day’s play, adding, “I was trying to place the balls in vacant areas. I was trying to hit it to the left of the fielder, but I didn’t get close to the ball, was trying to play on the up (on his dismissal). I will not look to repeat this mistake once again.”

During his knock, Shaw clobbered 11 boundaries and a six, totalling 50 of his 70 in boundaries. Talking about the knock, the Mumbai batsman said his mantra of playing is simple, don’t over complicate things.

I was just trying to play my natural game, but unfortunately couldn’t make it big, couldn’t place the drive. I just wanted to play my natural game and play on merit. I don’t want to think too much, don’t want to get confused and get blank in my mind. (Shannon) Gabriel and (Jason) Holder were bowling with good pace, I wasn’t trying to hit too hard, just looking for gaps, the ball wasn’t swinging a lot,” he added.

India finished day two at 308/4, trailing West Indies by just three runs and it was another youngster who was at the front front, Rishab Pant, who for a change curtailed his aggressive mindset scoring 85 off 120 balls. 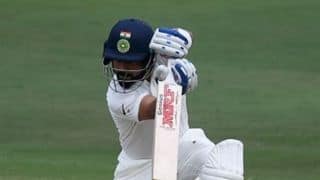 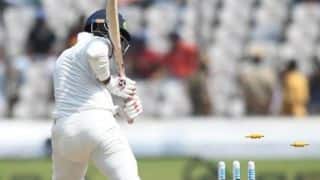