Prithvi Shaw too good for his age: VVS Laxman

Prithvi Shaw too good for his age: VVS Laxman

Former India batsman VVS Laxman is impressed with Prithvi Shaw s approach and feels the 18-youngster is destined for big and great things in Indian cricket.

Former India batsman VVS Laxman is impressed with Prithvi Shaw s approach and feels the 18-youngster is destined for big and great things in Indian cricket. Shaw, 18, struck a hundred to become the youngest Indian to score a century on Test debut 18 years and 329 days. Shaw scored his maiden hundred off 98 deliveries with 15 fours, shortly after lunch on the opening day of the first Test between India and West Indies in Rajkot. The feat also made Shaw the 15th Indian to register a century on debut. Rohit Sharma was the last to do so, also against the West Indies in 2013.

“It s not often that a Test hundred by Virat is overshadowed. As well as the captain played, his thunder was stolen by a teenaged debutant,” Laxman wrote in his column for the Times of India. “Prithvi Shaw is certainly cut out for bigger things. It was heart-warming to see him produce a spectacular century on debut. The young man wasn t overawed by the occasion or the stage and played in much the same manner as he does in first-class cricket with a dominant, attacking mindset. His approach revolves around getting on top of the bowling and imposing himself, and he played true to character. That he understands his game so well at such a tender age, and is also mature way beyond his years, indicate that he one for the long haul.”

Laxman was equally impressed with Ravindra Jadeja, who has been unstoppable since making his return to cricket. During India s fifth Test against England at the Oval, Jadeja collected a match haul of 7 for 258 and scored an unbeaten 86. In the Asia Cup, the allrounder picked up seven wickets and played extremely crucial knocks during India s tie against Afghanistan and in the final against Bangladesh. Then, on his home ground, against the West Indies, Jadeja struck his maiden Test century and picked up 3 for 35 in the second innings as the visitors collapsed for 196.

“I was also delighted for Ravindra Jadeja. He has made massive scores in First Class cricket and chipped in with half-centuries at the international level,” Laxman said. “But a maiden Test hundred does wonders for confidence like few other things do, and that it came on his home ground must have made it doubly special for him. It has been a productive last couple of weeks for the allrounder, and he will look to build on it as we head towards a busy, important next few months.”

India defeated the West Indies by an innings and 272 runs, their biggest win by an innings. India were ruthless in all three departments, forcing their opposition to surrender rather meekly inside three days. They were bowled out twice on Day 3, having conceded 649 runs in the first innings. Laxman said he expected more from the Windies.

“On a very good track for batting, India must have been taken by surprise at how meekly the Windies capitulated in the first Test. Virat s men might have expected a stiff workout in Rajkot, but the Windies failed to put up a fight, surrendering tamely against the all-round might of the home side,” Laxman added.

That said, Laxman pointed out that credit must be given where it s due. India were a far superior side and outplayed West Indies, who were without regular captain Jason Holder and pace spearhead Kemar reach, from day one. Kohli scored his 24th Test century, Ashwin finished with 4 for 37 in the first innings, followed by Kuldeep Yadav s maiden five-wicket-haul in the second that knocked the stuffing out of the visitors.

“The sign of a top team is that it sticks to its game plans, no matter the quality of the opposition,” Laxman. “India didn t take their foot off the pedal even though the Windies hardly pushed them, which is another excellent sign. The fast bowlers were impressive in the first innings, and it was no surprise to see Ashwin and Jadeja get among the wickets even though there was no great help from the surface. But it was Kuldeep Yadav who walked away with the plaudits. He was a bit off-colour in the first innings, his confidence probably still a bit dented by the Lord s Test.”

The second Test starts in Hyderabad from Friday, October 12. 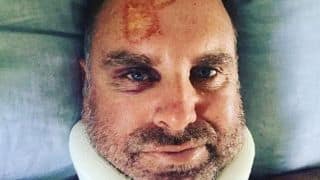