Chris Gayle put on a show with a flurry of fours and sixes as West Indies set India 255 (revised target) to win the rain-affected third and final ODI in Port of Spain on Wednesday. After opting to bat, Gayle alongside fellow opener Evin Lewis led a bright start as West Indies finished at 240/7 with the match reduced to 32-overs per side after a long rain delay.

With an opening stand worth 114, the foundation was laid. But with two new batsmen in Shimron Hetmyer and Shai Hope, Indian bowlers saw an opportunity. Spinners were introduced who slowed down the proceedings a bit. And then along came the rain. After a frustrating wait lasting just over three hours, the contest finally resumed with West Indies 158/2 in 22 overs.

The time lost resulted in reduction of overs making it 32-overs per side contest. West Indies managed 82 from their final 13 overs thanks to a 16-ball 30 from Nicholas Pooran after the pair of Hetmyer (25 off 32) and Hope (24 off 52) struggled to push the scoring rate on resumption. Khaleel was expensive leaking 68 runs but also picked up three wickets, the most for India. 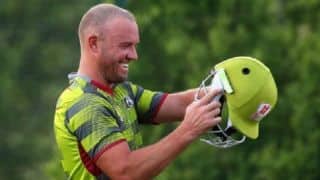