KL Rahul scored his maiden fifty as before this whenever he has reached a half-century, he has converted it into three figures.

India and West Indies faced each other on Day One of the third Test at Darren Sammy National Cricket Stadium, St Lucia with India having a lead of 1-0 in the four-Test series. Jason Holder won the toss and invited India to bat first on a pitch which had something for the pacers. India’s top-order fell flat due to a disciplined bowling effort from the home team as no one except KL Rahul could pose a fight from the visitors camp. He scored 50 runs off 65 balls before his efforts were overshadowed by Ravichandran Ashwin and Wriddhiman Saha. Rahul took control of the proceedings from India’s point of view from the first session and got out just before the stroke of lunch.  Full Cricket Scorecard: India vs West Indies, 3rd Test match

Dhawan was the first wicket to have fallen in the day with a well planned bouncer followed by Virat Kohli, who promoted himself up the order instead of axed, Cheteshwar Pujara. He got out for 3, thereby proving to be the first wicket of debutant, Alzarri Joseph, the U-19 sensation from West Indies team. India vs West Indies 3rd Test, Day 1 Full Updates

Rahul played a gem of an innings as he scored fluently and scored at all corners of the ground. He reached his 50 by playing shots all over the park but a lapse in concentration made him pay the price for his ouster. He, thereby, scored his maiden fifty as before this whenever he has reached a half-century, he has converted it into three figures. Sadly, Rahul could not do the same for his side this time. Roston Chase took his wicket to reduce India to 77 for 3. Rahul looked his usual best but the day belonged to Ashwin and Saha for putting up a fightback for the team. 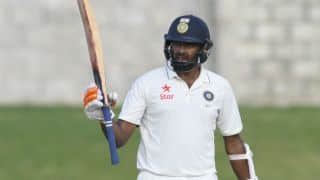