India already lead the four-Test series 1-0 and another win here would seal the series for the Virat Kohli led side.

India were all over West Indies on Day Four of the third Test at St Lucia. After Day Three was washed out due to persistent rains, West Indies lost the plot completely after hanging around for the first two days as they lost wickets like nine pins and handed all the advantage to the visitors. West Indies lost their remaining nine wickets for 118 runs and gave a stellar lead of 128 runs to India from where they can dictate the remaining match. India already lead the four-Test series 1-0 and another win here would seal the series for the Virat Kohli led side. Full Cricket Scorecard: India vs West Indies, 3rd Test match

In the first session, India dismissed the overnight pair from Day Two, Kraigg Brathwaite and Darren Bravo, but a fightback from the pair of Marlon Samuels and Jermaine Blackwood ensured they were not left behind in the game. Later, Bhuvneshwar Kumar as he took a five-for to rattle and surprise the hosts. In the last session, India looked to make runs at a brisk rate before the can ask West Indies to bat again. India scored at more than three per over with frequent boundaries despite losing three wickets for 72. Full cricket updates: India vs West Indies, 3rd Test, Day 4

KL Rahul and Shikhar Dhawan started things well for the team and added 50 runs for the first wicket but after the former’s dismissal, Kohli and Dhawan got out and there was slight pressure on Ajinkya Rahane and Rohit Sharma to not get over aggressive and also not get bogged down in the process. They stitched an important unbeaten partnership of 85 runs to take India’s lead to 285 runs at stumps on Day Four. There were quite a few boundaries and three maximums, from Rohit’s willow, to take India to a consolidating position. 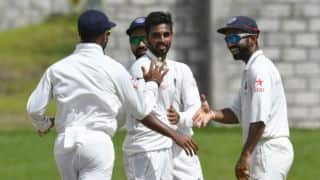 Sri Lanka vs Australia, 3rd Test: 5 players who could lead hosts to whitewash against Aussies