Ajinkya Rahane and Rohit Sharma were unbeaten at 51 and 41 respectively at stumps on Day Four of the third Test between India & West Indies.

India will seek to assert their dominance on West Indies as they resume batting from 157-3 on a decisive, Day Five at St Lucia. The online cricket streaming of the match will available on tensports.com, along with OZEE.com and DittoTV mobile app. Meanwhile, the live telecast of the match will be available on Ten 3 and Ten 1 HD, along with Hindi commentary on Ten 2. Ajinkya Rahane and Rohit Sharma were unbeaten at 51 and 41 respectively at stumps on Day Four. A fantastic effort from the Indian bowlers, especially Bhuvneshwar Kumar who bagged figures of 5 for 33 saw India coming back into a game which looked like it was heading towards a draw.  Full Cricket Scorecard: India vs West Indies, 3rd Test match

West Indies were bowled out for 225 on Day Four as they collapsed like a pack of cards to give India a chance to consolidate on the proceedings. India did just that. India now lead by 285 runs and would like to score runs at a quick pace in the first session on Day Five. If they can put up a score in excess of 350 runs, they would give themselves a chance to have a go at the hosts. West Indies’ collapse after a good performance till Day Two would give India a psychological boost to bowl out them out and make it 2-0 before the teams head for the fourth Test. FULL CRICKET UPDATES: India vs West Indies, 3rd Test, Day 5

India’s captain Virat Kohli will be counting on his bowlers to run through the West Indies batting line-up, like they did in the first innings. Eyes will be on Bhuvneshwar who with his terrific swing bowling display wrapped things up quickly to give India a chance to go on and win the Test. 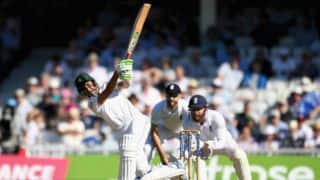