Mohammed Shami was the pick of the bowlers from India's side with three wickets whereas others chipped in as well.

India won the third Test at St Lucia by thrashing West Indies by 237 runs to seal the four-Test series 2-0, with one match to go. Day Five started with India consolidating on their lead and scoring runs at a brisk rate to give a target of 346 runs to West Indies. Ajinkya Rahane scored a valiant 78 not out to add to the miseries of the home team. The home team had shockingly given away all the advantage they possessed in the starting few days of the match as they collapsed on Day Four with the bat. The script remained the same for them as they got bundled out for 108, their second lowest Test score against India to handover the series to the visitors. Full Cricket Scorecard: India vs West Indies, 3rd Test match

No one stuck around for the home team as they lost wickets like nine pins from the start of the innings itself. They never looked like the same team which had shown some fight in the last Test to draw the game by batting out the entire final day. Every batsmen came and went except Darren Bravo who looked in control of his innings before he went for 59. Full cricket updates: India vs West Indies, 3rd Test, Day 5

West Indies looked clueless as to what to do in the fourth innings. Mohammed Shami was the pick of the bowlers from India’s side with three wickets whereas others chipped in as well. This is India’s third consecutive series win under Virat Kohli. They defeated Sri Lanka (2-1) and South Africa (3-0) and will be beaming in confidence before their grueling home Test series, starting from September 2016. 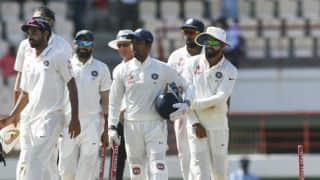