"Off the field, we are very good friends. I have been opening the innings with Vijay, so we get along well anyway and now Rahul is also a part of the group," said Shikhar Dhawan.

St. Lucia: Asserting that there exists a ‘healthy competition’ among three openers for the opening two slots, Indian batsman Shikhar Dhawan has said that they are least bothered about their selection and are enjoying each others on-field success and company off the field. “There is a healthy competition in the team, which is very good for Indian cricket,” Dhawan was quoted as saying by bcci.tv. “Off the field, we are very good friends. I have been opening the innings with Vijay, so we get along well anyway and now Rahul is also a part of the group. We hang out together and go out to have dinners together. FULL CRICKET SCORECARD: India vs West Indies, 3rd Test at St Lucia

“Yes, we are competitors and fighting for a spot as all three are doing well simultaneously, but we enjoy each others success. It is a beautiful yet a rare thing that sportsmen get to experience. We are large hearted and when one of us does well, all feel happy.” The competition has become fierce among the three openers especially after KL Rahul scored a stupendous century in Jamaica in the absence of first-choice opener Murali Vijay, who was ruled out of the second Test due to a thumb injury. On the other hand, a rejuvenated Dhawan has regained his form as he scored a vital 84 in their opening Test in Antigua.

The Indian batting, comprising of five specialist batsman, has looked rock solid in both matches as they had to bat only twice in the series and accumulated 500 plus runs in both the innings. The 30-year-old dashing southpaw insisted that the onus was on the batsmen to play responsibly when his side chose to play with five specialist bowlers in Antigua and Jamaica.”It is our job to see that we don’t get out till the new ball loses it shine, so that it becomes easier for others to follow. We are doing well at the moment and will look to do well in the remaining two Tests too,” Dhawan said. While stressing the importance of waiting game, Dhawan said that he countered the disciplined West Indies bowling by spending more time in the middle and leaving a lot of balls outside the off stump. ALSO READ: India vs West Indies 3rd Test: India eye series win over inconsistent hosts

“It was not really a target, but I had sensed that the West Indies bowlers won’t bowl fuller lengths for me drive the ball, which is my strength. I had to counter this by spending time in the middle and wait for loose balls. I know I’ve the ability to push the run-rate up even if I get off to a slow start,” he said. Despite the drawn second match, India are still leading the four-match series and will aim to take an unassailable 2-0 lead when they will play the third Test on Tuesday at Gros Islet. 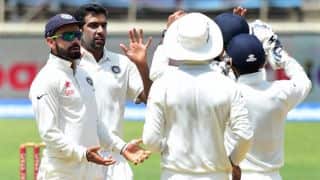 Why Virat Kohli should prefer Ravindra Jadeja over Amit Mishra