India vs West Indies 4th ODI at Dharamsala: Ajinkya Rahane out for 68

India vs West Indies 4th ODI at Dharamsala: Ajinkya Rahane out for 68
By CricketCountry Staff

India lost the wicket of Ajinkya Rahane for 68 in the fourth One-Day International (ODI) against West Indies at Dharamsala on Friday. Suresh Raina is the new batsman in.

Rahane was adjudged leg-before off Suleimann Benn’s bowling. Rahane went for a sweep shot for  ball which was moving away from the off-stump. He missed the shot and umpire Vineet Kulkarni took a long time before raising his finger. Rahane was earlier dropped on 38.

Benn had restricted the flow of runs finding some grip off the pitch. However, the two batsmen had done well to place the ball in the gaps and sneak out singles. The rotation of strike helped them avoid the pressure in the middle overs. 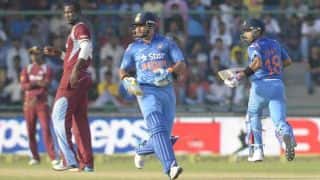