India vs West Indies 4th ODI at Dharamsala: Andre Russell out for 46; score 227 for 7 in 42 overs
By CricketCountry Staff

Andre Russell was dismissed by Umesh Yadav for 46 runs in the fourth ODI played between India and West Indies at Dharamsala on Friday.

Russell was looking really dangerous as he smashed the ball over the ground but missed a good length delivery from Yadav which kissed top of the off stump. Russell reached 46 only from 23 deliveries. His knock included six boundaries and three big sixes. Jason Holder joined Samuels in the chase. West Indies had reached 227 for 7 after 42 overs.

This is the series-deciding match as the West Indies have called off the series due to the payment dispute between players and the board. India had earlier posted 330 for six against a deflated West indies performance. Virat Kohli scored his 20th ODI century while Ajinkya rahane and Suresh Raina scored half-centuries. BCCI calls for emergency meeting after West Indies pull out 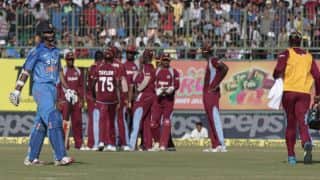