Just 22 overs have been bowled in two days of the Test as Day One saw some action in the first session with West Indies ending their day at 62 for 2 against India.

After the Day Two of the final Test between India and West Indies being called off due to wet conditions, both the teams look for some action. Just 22 overs have been bowled in two days of the Test as Day One saw some action in the first session after which rain played spoilsport. India will be hoping for a big Day Three without any interference of rain as they need a win to retain their spot at the top of the ICC Test rankings. West Indies were delicately placed at 62 for 2 in 22 overs as Day Two did not witness a single delivery being bowled. West Indies got off to a shaky start as Leon Johnson and Darren Bravo had to make the long walk early on in their innings. Full Cricket Scorecard: India vs West Indies, 4th Test match

Ishant Sharma scalped Johnson for nine with a well-planned bouncer, whereas Ravichandran Ashwin got the better of Bravo with an absolute stunner. Marlon Samuels and Kraigg Brathwaite have stuck to their guns and remained unbeaten. They will be eager to go out and score some runs. Brathwaite looked solid for his 32 from 78 deliveries while Samuels was batting at four when the rains played spoilsport.  Full Cricket Updates: India vs West Indies, 4th Test match

With rains being predicted for all five days of the Test, India will have to bring their best on every session they get. India have made couple of commendable changes by getting Murali Vijay and Cheteshwar Pujara on board at the expense of Shikhar Dhawan and Ravindra Jadeja. Indian skipper Virat Kohli has opted for an extra batsman and kept the five-bowler strategy out of context at the moment. The experiment is justified as India have struggled to figure out a right combination across conditions.

West Indies will be eyeing to save this Test and make it 2-0 for the hosts. One can expect them to bat cautiously and provide no room for error. With rain looming over the venue one can expect the pitch to play differently. There was enough bounce and turn in the morning session for the bowlers to exploit. But the weather has not permitted enough action in two days into the Test match. With another day possessing threat of rain, both the teams will be hoping for some action on Day 4. 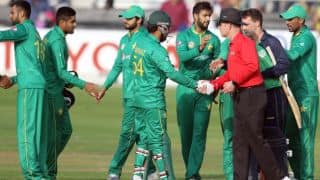