With the match abandoned as a draw, India won the series 2-0, the first time they have won more than a Test in a series in the Caribbean.

Port-d’Espagne, Trinité-et-Tobago: The Trinidad and Tobago Cricket Board have launched an investigation after the fourth and final Test between the West Indies and India lasted just 22 overs due to a waterlogged outfield. No play was possible at the Queen’s Park Oval on Monday’s scheduled last day of the match, the fourth consecutive day on which there was no play because of saturated areas around the playing square. The farcical abandonment came despite long periods of sunshine and desperate efforts of groundstaff to make the surface playable with shovels, pitchforks and leaf blowers. Full Cricket Scorecard: India vs West Indies, 4th Test at Trinidad

With the match abandoned as a draw, India won the series 2-0, the first time they have won more than a Test in a series in the Caribbean. However the Indians surrendered the position of number one Test team in the ICC rankings to Pakistan as they had needed to complete a 3-0 series triumph to stay top. India had been number one for less than a week after displacing Australia at the top on August 17. Ashwin: Expected handsome return from West Indies tour

“As hosts, the Trinidad and Tobago Cricket Board and QPCC (Queen’s Park Cricket Club) regret that limited play was possible in the 4th Test Match between WI and India at the Queen’s Park Oval,” Trinidad and Tobago Cricket Board president Azim Bassarath said in a statement. “We have jointly launched an investigation to determine what occurred with a view to remedying the situation so that this does not occur in the future,” the statement continued. Simmons blames gap between Test and domestic quality for WI’s bad run

“Once this has been done it will be presented to the WICB (West Indies Cricket Board).” Bassarath gave no indication of a time-frame for the conclusion of the investigation. It is understood that prominent officials of QPCC, who celebrated the 125th anniversary of the club’s founding over the Test match weekend, are concerned that the farcical abandonment could jeopardise the venue hosting major international matches in the future. Kohli: Getting to No. 1 was always a short-term incentive

Pakistan are scheduled to tour the Caribbean in 2017. The shambolic finale will be of major concern to the WICB, given that the agreement of the Indians to play four Tests in the Caribbean was seen as a major diplomatic triumph after the abandonment of a tour of India by the West Indies in October 2014. India subsequently dropped their multi-million dollar compensation claim against the WICB after the tour was cut short amid a players’ pay dispute. West Indies and India will play two Twenty20 Internationals in Lauderhill, Florida, on August 27 and 28 as both teams seek to tap into the huge expatriate Indian population in the United States. 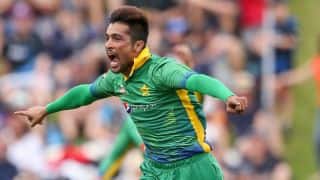 Pakistan’s approach vs England in ODI series should not alter, says Yasir Arafat