Jadeja and Ishant, who later in the day went on to scalp five wickets, put on 60 runs for the eighth wicket with Ishant scoring 19 off 62 balls.

After rescuing India from spot of bother at 189/6, Ravindra Jadeja, who scored 58 batting at No.8 to help India to 297 in the first innings of the 1st Test against West Indies at Antigua on Saturday, the all-rounder said his main focus was to stay out in the middle for as long as possible.

“When I was batting out there in the middle, I just looked to build a partnership,” said Jadeja after the end of day’s play. “I was focussing to play with the tailenders. I was constantly talking to Ishant, and we talked about staying out in the middle for as long as possible. We were thinking about one over at a time.”

Jadeja and Ishant, who later in the day went on to scalp five wickets, put on 60 runs for the eighth wicket with Ishant scoring 19 off 62 balls.

“I am just very positive in my mind, my shot selection is positive. When Rishabh got out, I was talking to Ishant about staying out in the middle and building a partnership. It is not good for opponents if the lower order is constantly scoring runs, so it was the gameplan from our side,” he added.

The 30-year-old is the lone specialist spinner in the playing XI for India and were formed cricketers criticised the commission of Ravichandran Ashwin, Jadeja is thankful for the support shown in his by the team management.

“Obviously you feel good when the skipper believes in you, thinks of you as the main player. Luckily, I have been able to repay the faith by performing well,” Jadeja said.

After his rearguard effort with the bat, Ishant bowled well to register his ninth fie-wicket haul in Tests to leave WI reeling at 189/8 and Jadeja lauded the Delhi bowler’s efforts.

“Ishant bowled well. The two caught and bowled were remarkable, and I believe those two dismissals as the turning point,” said Jadeja, adding, “On this wicket, you have to bowl in the right areas. Ishant’s rhythm improved by each over he bowled. If he did not hold on to two return catches, the situation might have been different. Those two dismissals helped us in turning the momentum into our side.”.

West Indies will resume day three of the first Test at 189/8, still 108 runs behind India. 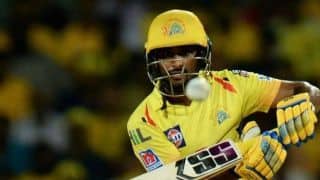 Ambati Rayudu takes U-turn on retirement; says will play in the IPL