Jadhav had been left stumped at his omission from India’s 15-member squad for the third, fourth and fifth ODIs against West Indies this week.

The BCCI selectors have added Kedar Jadhav to India’s ODI squad to for the fourth and fifth games against West Indies.

Jadhav had been left stumped at his omission from India’s 15-member squad for the third, fourth and fifth ODIs against West Indies which was named this week, and the chairman of selectors MSK Prasad a day earlier said that he was not picked because of his “fitness history”.

Jadhav, who injured his hamstring during the Asia Cup final last month, was not picked for the squad for the first two ODIs, but was drafted into the India A side for the Deodhar Trophy as the selectors wanted to assess his fitness before taking a call about his inclusion.

On Thursday, Jadhav dismissed all doubts regarding his fitness when he scored 41 off 25 balls for India A during the Deodhar Trophy match against India C and then bowled five overs in front of the national selectors.

When asked about whether he had any communication from the selectors regarding his exclusion, Jadhav said was unaware of his exclusion from the ODI side the remaining three matches against West Indies. 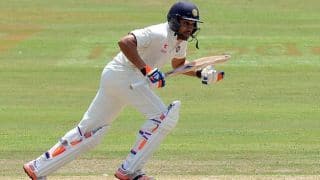