India vs West Indies: Kevin Pietersen, Brian Lara Back Rishabh Pant, Says Young Wicketkeeper-Batsman is Just 21-Year-Old And He Should be Given Time to Mature

Former England captain added that former players and experts criticise Pant because they want him to learn from his mistakes.

Former England captain Kevin Pietersen believes that under-fire Rishabh Pant needs to be given time to mature as there is still some years before he can realise his full potential. The 22-year-old is enduring an ordinary run of form and has struggled to make any significant impact both with the bat and behind the stumps. Pant also copped criticism for bad DRS calls.

Pant played a decent knock of unbeaten 33 in the second T20I against West Indies, which India lost by eight wickets in Thiruvananthapuram on Sunday.

“He is young and he has that energy and enthusiasm, he plays in the IPL, and he plays for India and is just living his dream. There will be a lot of critics around him, he’s only 21 (22),” Pietersen said on Star Sports’ ‘Nerolac Cricket Live’ show.

He added that former players and experts criticise Pant because they want him to learn from his mistakes.

“I observed him very closely during the IPL and he kept making the same mistake and when you do that continuously then pundits, experts and people who have played the game want to criticize you because you should be learning from your mistakes.

Along with Pietersen, West Indies batting legend Brian Lara also backed Pant and said there is ‘excessive pressure’ on the young keeper. “Rishabh Pant came into the game creating a lot of excitement, he had a lot of aggression and the Indian public expects someone to replace Dhoni immediately and in the same fold but he is a totally different player.”

“I know the time is critical with the World T20 just 8 or 9 months away and they may even go with another keeper but the excessive pressure on him is unnecessary.”

Lara also concurred to Kohli’s decision of backing Pant to allow the young wicketkeeper-batsman to mature. “I agree with captain Virat Kohli on supporting Pant as this is a very successful Indian team and I remember the West Indies team 30 years ago, we had guys in there who weren’t performing well but they were kept in the team because the team was doing very well,” he signed off. 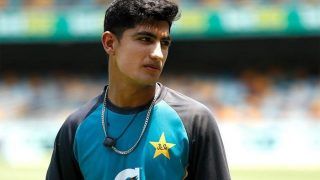 Naseem Shah to be Replaced From Pakistan U-19 World Cup Squad After Being Named in Senior Team For Sri Lanka Tests: Source