Currently, India are 133 for the loss of two wickets in 16 overs against West Indies in T20 World Cup 2016 semi-final.

Indian opener Ajinkya Rahane was dismissed for a healthy 40 by fast bowler Andre Russell, after being caught by Dwayne Bravo at mid-wicket, against fellow former champions West Indies, in the second semi-final of the ongoing ICC World T20 2016 at the Wankhede Stadium in Mumbai on Thursday. It was a short and simple one from Russell, as in order to increase the run pace more, Rahane went for a solid pull over the mid-wicket, but not enough power and elevation, as it sailed comfortably into the hands of Bravo, who is a great fielder in any position. Currently, India are 133 for the loss of two wickets in 16 overs, with Virat Kohli on 44 and skipper MS Dhoni on one. FULL CRICKET SCORECARD: India vs West Indies, ICC World T20 2016, 2nd Semi-Final match at Mumbai 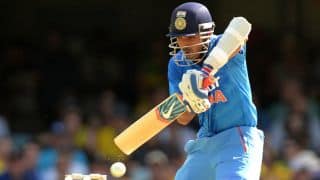 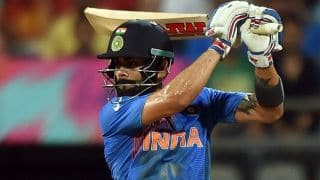