Hello and welcome to our live coverage of day four of the 2nd Test between India and West Indies at Sabaina Park, Jamaica on Monday.

West Indies were left battling to save the Test and the series after India reduced them to 45/2 in the second innings, in pursuit of 468. India made short work of West Indies, needing approximately 75 minutes to dismiss them. With India ahead by 299, in a bid to provide his bowlers rest in the sapping Jamaica heat, Virat Kohlidecided against enforcing the follow on.

West Indies pacers, led by Kemar Roach responded with fire, leaving India at 36/3 before half-centuries from Hanuma Vihari and Ajinkya Rahane upped the tempo. From 41 runs scored in the first 20 overs, Vihari and Rahane added runs an over six an over post tea and declared 467 ahead. West Indies openers Kraigg Brathwaite and John Campbell walked out hoping to play out the remaining 16 overs unscathed, but Ishant Sharma and Mohammed Shami landed two early blow to tilt the balance heavily in favour of India.

Jasprit Bumrah, whose hat-trick had crippled West Indies on Day 2, failed to add more wickets and it was left to Mohammed Shami, Ishant and Ravindra Jadeja to wipe out the Windies tail, which showed more resistance than their top order had displayed. Windies’ first few runs of the morning session were through inside edges, before Shami bounced out Rahkeem Cornwall. In his Test debut, Jahmar Hamilton almost added no run to his overnight score of 2 for 10 overs, and after crawling to 5 off 58, he became Ishant’s only wicket of the innings. Roach struck three boundaries in an entertaining 17 off 31 before falling to Jadeja. Ashes 2019: Mitchell Starc closer to Old Trafford inclusion, but at whose expense? 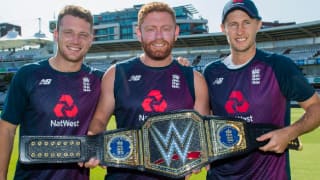