India and West Indies will face off in the warm-up match of ICC World T20 2016 at Eden Gardens in Kolkata on Thursday. India are clear favourites to win the tournament, with Virat Kohli, Rohit Sharma, Shikhar Dhawan Yuvraj Singh MS Dhoni, Suresh Raina, and Hardik Pandya making for an excellent batting line-up. Meanwhile, the bowling attack of Jasprit Bumrah, Ashish Nehra, Pandya, Ravichandran Ashwin, and Ravindra Jadeja too has been in great nick. The bowlers in fact have been in even better form than their batsmen, and have been the major cause of India’s victories. Live Cricket Scores and Updates: India vs West Indies, ICC World T20 2016 IND vs WI, warm-up match at Eden Gardens

West Indies have some huge names in the format as well, with the likes of Chris Gayle, Dwayne Bravo, Andre Russell, and skipper Darren Sammy in the squad. The absence of Kieron Pollard and Sunil Narine will hamper their chances. According to AFP, West Indies captain Darren Sammy said, “Chris is a massive figure for us, not only on the cricket field but off the field as well. To me he is the best T20 batsman, the most destructive one in this game so he knows his game inside out…Once you step out on the cricket field you shouldn’t be worryied about contracts or other stuff. At the end of the day we are professionals but right now is the time to focus on cricket…It’s always difficult to replace someone like Narine but we believe the players in the team could still come and get the job done for us.” 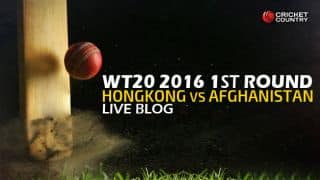