Currently, India are 55 for no loss in six overs against West Indies in T20 World Cup 2016 semi-final.

Former champions and hosts India continued their steady as well as slow start to their innings, against fellow former champions West Indies, in the second semi-final of the ongoing ICC World T20 2016 at the Wankhede Stadium in Mumbai on Thursday. The openers seemed to have settled down following a slow start as they continue their steady run in the innings, with both the batsmen judging the ball properly, and then going for the shots, as they seem to be waiting for the poor deliveries to go for the big shots, as the mandatory powerplay comes to an end. Currently, India are 55 for no loss in six overs, with openers Rohit Sharma and Ajinkya Rahane on 41 and 12, respectively. FULL CRICKET SCORECARD: India vs West Indies, ICC World T20 2016, 2nd Semi-Final match at Mumbai 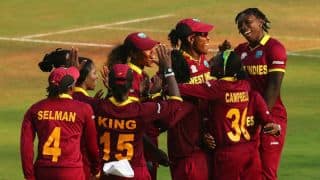