Shaw, 18, is in line to open the innings with KL Rahul in the first Test while Agarwal, 27, could get a look-in as a middle-order option.

Ajinkya Rahane, India s Test vice-captain, has stated that the uncapped batting pair of Prithvi Shaw and Mayank Agarwal are under no added pressure to perform ahead of their likely debuts against West Indies.

Shaw, 18, is in line to open the innings with KL Rahul in the first Test on Sunday while Agarwal, 27, could get a look-in as a middle-order option in the second match should Hanuma Vihari not make his opportunity count in Rajkot.

Shaw was part of India s squad for the fourth and fifth Tests in England, and with Shikhar Dhawan dropped he is the likeliest candidate to partner Rahul. Agarwal s maiden call-up to an Indian squad came after a prolonged run of form in domestic cricket and with India A, and while Vihari is the likelier to play the first Test given his promising debut in England, the Karnataka batsman may well get a chance given the amount of time he has been knocking on the selectors doors.

There is no pressure on Mayank and Prithvi, they have the support of the team management and it is their opportunity to perform, Rahane told reporters in Rajkot on Tuesday. I am happy for him [Shaw] I saw him as a kid, we have practiced together and he has been doing well in the domestic circuit. I want to see him the way he batted for India A and Mumbai and I am sure he will do just fine.

India are back to playing Tests after the 1-4 series loss in England, and though their opponents are ranked eighth, Rahane said the hosts were not underestimating them.

“We are not taking West Indies lightly, but our focus is on trying to improve our performance as a team. Rather then looking at the opponent, our goal is to play good cricket, he said. 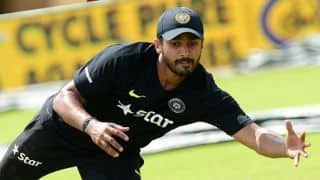