The fourth ODI is scheduled to be held at the Wankhede Stadium on October 29 .

With the Mumbai Cricket Association (MCA), organisers of the fourth ODI between India and West Indies scheduled on October 29 at the Wankhede Stadium, left without any office bearer to sign vendor payments, the Supreme Court will step in to decide if MCA will be in a position to host the match or not.

According to a report in PTI on Wednesday, MCA Secretary Unmesh Khanwilkar along with another official sought help from the Bombay Court to form an ad-hoc committee. The High Court now has asked MCA to approach the apex court.

“The documentation work is going on. In a day or two the petitioners will approach the top court seeking directions for the conduct of the October 29 game,” MCA sources said. 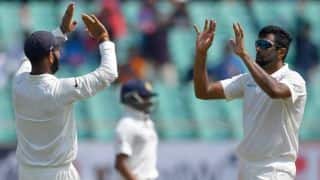 India vs West Indies: If it’s Hyderabad, it's gotta be the Pujara-Ashwin show