Large crowds are expected at the Oval for the second leg of the cricket tri series, starting on Friday with India playing West Indies. 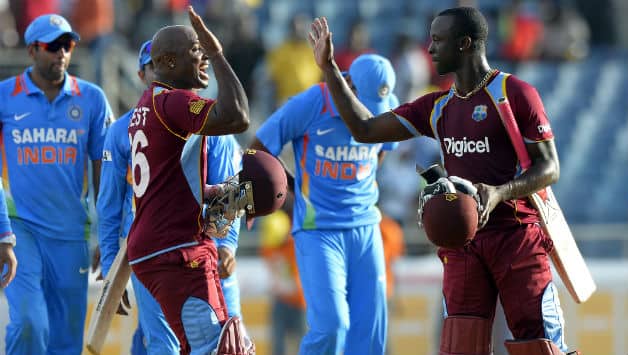 Large crowds are expected at the Oval for the second leg of the cricket tri series, starting on Friday with India playing West Indies.

WICB‘s Event Manager Cindy McLean has confirmed that tickets for the weekend games have been sold out.

“We can confirm that all the tickets, made available to the public, for Friday’s match and Sunday’s match have been purchased well in advance,” McLean said.

“This is great news as the fans continue to show their support for the game. Everyone saw the high quality of play and the excitement in the first leg games in Jamaica and now we expect a similar level of enthusiasm here in Trinidad.”

It is a crucial game for both the teams. India must win at Queens Park Oval to stay in the competition and the West Indies will seal a place in the final by winning.

West Indies are hunting for their third straight win after victories against Sri Lanka and India during the Jamaica leg of the tournament.

India, who rested pace man Bhuvaneshwar Kumar in the last match against Sri Lanka, are expected to bring him back in place of Mohammad Shami.

India may not press the panic button making any other changes to a side that won the Champions Trophy in England only a week ago.

The Caribbean side has made one change to their squad for the Trinidad matches, bringing in fast bowler Jason Holder in place of the injured Ravi Rampaul.

However, skipper Dwayne Bravo, who was rested in the previous match as a precautionary measure, could come back to lead the side.

“We expect the ground to be full on Friday and Sunday as fans come out to support their favourite team,” McLean said.

“The West Indies team has been doing very well, as they lead the points table, and the home fans have stepped up their support.”

The two losses in Kingston mean the Indians have found themselves in a position where even two wins won’t be enough to guarantee their progression.

Defeat for India won’t completely wipe out their chances but will leave them hoping for the rest of the results to work in their favour.