Port of Spain (Trinidad) After bagging the Test series with a comprehensive win in the third match, India will aim to regain the No.1 rankings with a big margin victory against a under-confident West Indies in the fourth and final game starting here on Thursday. India registered a 237-run win in the third Test and took an unassailable 2-0 lead in the four-match series, after winning the first Test by an innings and 92 runs, the second ending in a draw. A big margin win against the hosts will ensure Virat Kohli-led side a place in the top of the International Cricket Council (ICC) Test rankings replacing Australia. FULL CRICKET SCORECARD: Sri Lanka vs Australia, 3rd Test at Colombo

With the team’s batting licking in the previous three matches, Anil Kumble-coached side is unlikely to make big changes in the line-up. With opener Murali Vijay fit after a thumb injury, one can expect Shikhar Dhawan to be dropped for the final match and Vijay being given a chance. Dhawan has hardly scored much except his 84 in the first match. ALSO READ: India vs West Indies: BCCI announces ticket prices for T20I matches

But with Lokesh Rahul in good form, scoring a century and a 50 in two Tests, Kohli might stick to the right-handed batsman for the final match. Besides Rahul, Ajinkya Rahane would also hold his place after handy knocks. Rohit Sharma, who was given a chance in the third Test, is likely to be persisted with and Cheteshwar Pujara would then miss out from the playing XI. ALSO READ: Rohit Sharma: Will continue playing natural game vs West Indies

Skipper Kohli despite being the top run-getter in the series with 251 runs will aim to get some more runs under his belt ahead of the gruelling Test season lined up at home. In the bowling department, with the long Test season lined up ahead, seniors Ishant Sharma or Mohammad Shami might be rested which might pave way for Umesh Yadav or Mumbai pacer Shardul Thakur. On the other hand, the hosts have failed to prove themselves consistently with the bat, failing to score a big total in three outings.

Senior batsmen Marlon Samuels and Darren Bravo will have to take the responsibility and score big to have any hopes of ending the series with a consolation win. Besides the experienced duo, the young batsmen in the side will have to step up to prove a point. In the bowling department, skipper Jason Holder will have to take the responsibility to lead the attack again along with Carlos Brathwaite, Shannon Gabriel and Miguel Cummins while leg-spinner Devendra Bishoo is the lone specialist spinner in the team. 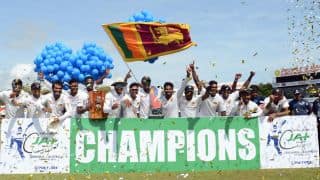