India bowling coach Bharat Arun has heaped high praises on Jasprit Bumrah whose spell in the second innings of the first Test blew away West Indies top-order setting the way for a huge win.

Bumrah took 5/7 from just eight overs as West Indies were reduced to 50/9 before being eventually bowled for 100 in chase of 418 which gave India 1-0 lead in the two-match series.

Speaking ahead of the second Test that gets underway in Thursday, Arun said Bumrah is a thinking bowler who adjusts as per the situation and hence after a not-so-impressive show (1/55) in the first innings, he led the charge in the second dig, singlehandedly destroying Windies batting order.

“Bumrah is a thinking bowler,” Arun told reporters. “He is aware of situations and adjusts himself beautifully. If you see the lengths that he bowled in the second innings, he pitched the ball up and was getting appreciable movements. That’s the best spell of fast bowling I have seen from an Indian in a long, long time.”

Throwing more light on what changes Bumrah made to his bowling in the second innings, Arun said he was ‘trifle short’ and ‘should have pitched it up’.

“Well, wickets are the outcome but I am not always looking at the outcome. I am looking at the execution part and that was exactly what was discussed with Bumrah after the first innings. His execution (in the first innings) was a trifle short and with his style of bowling, he should have pitched it up. Wickets were not a concern as the process of bowling right lengths will eventually get you wickets,” he explained.

He added, “He (Bumrah) is consistently bowling 140 clicks over a consistent period of time, and his action is not an orthodox one, so it takes a batsman a second longer to pick up what he is trying to do. What makes him even more potent is the fact that he is so accurate.”

Under Arun’s close watch, the Indian bowlers, especially the pacers, have become one of the most consistent and respected attacking units. “My interaction with every bowler is so different from one another,” Arun said of his relationship with the bowlers. “I think, it is extremely important to know the mindset of a bowler and once you are aware of that, it is easier for a coach to give the right feedback.”

He continued, “With Bumrah, we didn’t need to speak anything about his bowling. We just told him to change the length and he did that. Understanding is necessary as a coach. With, a small tweak you can make the bowler better.

“We have taken good care to ensure that their workloads are monitored, so that they remain fresh, when we need them. The key to their success has been how their workloads have been managed and how (seriously) these bowlers have taken up the fitness aspect.” 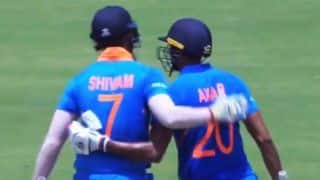