Zimbabwe will look to square the series having lost the first one marginally.

India take on Zimbabwe in the second One-Day International (ODI) at Harare. The hosts put on a magnificent show in the first ODI but could not get over the line as they lost the match by just four runs. Live Cricket Updates: India vs Zimbabwe, 2nd ODI at Harare

Ambati Rayudu top scored for India with an unbeaten 124, coming in at No.3, which are good signs for India. All-rounder Stuart Binny did his part too as his 160-run stand with Rayudu for the sixth wicket helped India reach a respectable total.

For Zimbabwe, Elton Chigumbura top scored with 104 not out. It will be interesting to see if both teams maintain the same playing XI or test out their bench strength for the all important second ODI. Live cricket scorecard: India vs Zimbabwe 2015, 2nd  ODI at Harare

Catch the live telecast of the second ODI between India and Zimbabwe at Harare on Ten Cricket and live streaming on tensports.com. 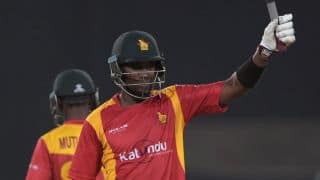