India face off against Zimbabwe in the third and final One-Day International (ODI) at the Harare Sports Club. Having already won the series after pulling off two consecutive wins, India will want to complete a clean-sweep of the series with this match. Ajinkya Rahane has led India well for the very first time, and after a shaky first ODI, the batsmen have come to the fore as well. SCORECARD: India vs Zimbabwe 2015, 3rd ODI at Harare

Zimbabwe have been good in patches but they are yet to string together consistent performances across a match. Elton Chigumbura played an outstanding innings in the first ODI and took Zimbabwe to within striking distance of victory, but the bowlers let the team down in the second match. Live Cricket Updates: India vs Zimbabwe, 3rd ODI at Harare

Catch the live telecast of the second ODI between India and Zimbabwe at Harare on Ten Cricket and live streaming on tensports.com. 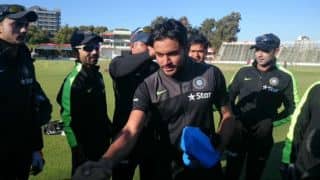