Catch the live cricket score from the first ODI between India and Zimbabwe here.

India‘s bench strength will be tested when a second string team takes on Zimbabwe in a three-match One-Day International (ODI) series beginning here tomorrow with the youngsters as well as a few seniors hoping to capitalise on the opportunity. It is India’s first assignment after heart-breaking series-defeat against Asian neighbours Bangladesh and taking the hosts lightly is hardly an option for the World Cup semifinalist as the African nation has shown progress and promise of late. Live cricket scorecard: India vs Zimbabwe 2015, 1st ODI at Harare

Rahane has to do well to cement his place in the Indian middle-order and other players such asRobin Uthappa, Manoj Tiwary, Kedar Jadhav, Ambati Rayudu and Manish Pandey too would be keen to make a mark. Bhuvneshwar will spearhead the pace attack and is most likely to have Mohit Sharma as his new ball partner. It is interesting to see if Rahane opts for three pacers which would mean that Dhawal Kulkarni will also get a game. Off-spinner Harbhajan Singh is the senior-most player in the side and with Axar Patel is certain to make the playing XI for the series-opener. Live Cricket Updates: India vs Zimbabwe 2015, 1st ODI at Harare

In their historic tour to Pakistan, they lost both ODI and Twenty20 series to hosts but Zimbabwe players did not go down without proving a point. Led by skipper Elton Chigumbara, they batted with determination against a decent Pakistan attack. Sikandar Raza, Vusi Sibanda and Chamu Chibhabha had ensured that Zimbabwe did not look like pushovers. 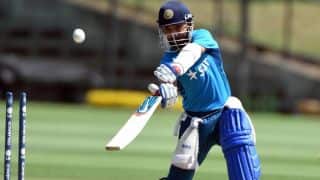 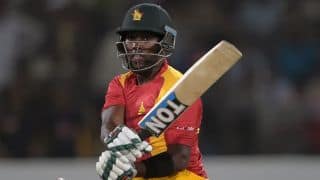