Under MS Dhoni's captaincy, India lost three back-back-back ODI series against Bangladesh, South Africa and Australia, followed by unsuccessful ICC World T20 2016 campaign on their home turf. It's time he gets back to winning ways.

Team India are already at work in building a team to defend the Champions Trophy title in England, the flagship tournament being just 12 months away. And, India’s tour of Zimbabwe is an ideal preparation to give emerging players an opportunity to comprehend the pressure at the international level. India will play three-match ODI and T20I series against hosts Zimbabwe at Harare Sports Club, starting Saturday. Like every year, India have rested their first-choice players and will play the second-string side. However, the only exception is the inclusion of the veteran MS Dhoni, who last played on the Zimbabwean soil in 2005. Full Cricket Scorecard: Zimbabwe vs India, IPL 2016, 1st ODI match, at Harare

MS Dhoni will look to regain his lost paradise:

Under Dhoni’s captaincy, India lost three back-back-back ODI series against Bangladesh, South Africa and Australia, followed by an unsuccessful ICC World T20 2016 campaign on their home turf. In fact, the last time India tasted victory in ODIs was against Zimbabwe in 2015, under Ajinkya Rahane’s captaincy.

Like the fans want Virat Kohli to score runs, they expect Dhoni to win matches. It is time he gets back to winning ways with the help of his young brigade. Read: Uncertainty over Day-Night Test in India

Zimbabwean bowlers will have to punch well above their weight to bundle out India:

Captain Graeme Cremer has been Zimbabwe’s most impressive bowler since ICC Cricket World Cup 2015. He has picked up 21 wickets in 18 ODIs at 34.14. Given the reputation of leg-spinners to provide much-needed impetus, Cremer will play a key role. Slow left-arm bowlers such as Tendai Chisoro and Wellington Masakadza may not have enough experience under their belt but have scalped wickets at an impressive average of just over 22.

Amongst pacers, Neville Madziva, Tendai Chatara and Donald Tiripano have not faced Test-playing nations often. Unquestionably, it will be an uphill task for them to contain the might of the Indian batsmen.

Thus, for Zimbabwe to put India on the back foot, their bowlers will have to be right on the money before the Indian batsmen fire on all cylinders. Read: Virat Kohli may be ready but there is still time for him to replace MS Dhoni

With the sacking of former captain Hamilton Masakadza and former coach Dav Whatmore, Zimbabwe have to put themselves in a spot of bother. For an interim period, the team will be led by Cremer and coached by Makhaya Ntini.

Zimbabwe cricket has been in a downward surge for over a decade now. They are not quite the force they were in the 1990s. To make matters worse, in a series that preceded ICC World T20 2016, Afghanistan whitewashed Zimbabwe. It does not come as a surprise that they are ranked below the Afghans in ODIs.

For them to revive their reputation, they have no option but to display good show of character against India.

One-third of the Indian team comprises of uncapped players: Most cricketers have made their way to the international level by putting up impressive performances in IPL. This year’s list features Yuzvendra Chahal, Mandeep Singh, Karun Nair and Jayant Yadav. However, left-handed batsman Faiz Fazal was the surprise pick for the tour. Though he may not have played in the last few seasons of IPL, he made headlines with his stellar show in Ranji Trophy 2015-16. Moreover, the 30-year-old’s experience will be handy amidst a pack of young guns. Read: India vs Zimbabwe 2016: Manish Pandey eyes permanent spot

Conclusion: India’s bowling unit is inexperienced as well, but it has more potent that Zimbabwe’s attack. However, the battle will be between India’s batting versus Zimbabwe’s bowling. Therefore, whichever team performs well in these departments will edge past the other.

Given Zimbabwe are underdogs in this contest, it will be an easy task for India to get the better of them. Nonetheless, India lost to the then minnows Bangladesh last year despite playing the first-choice team. If they underestimate the inexperienced yet talented Zimbabwe side, we might witness something unprecedented. But, to outfox Dhoni’s tactical leadership will be a herculean task for the struggling Zimbabweans. 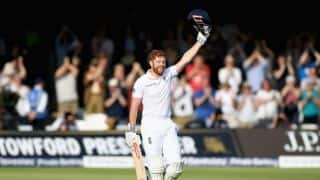