The series has taken an interesting turn as Zimbabwe have started the T20I series by winning the opener against India.

India is all set to face hosts Zimbabwe in the second Twenty20 International (T20I) of the three-match series at the Harare Sports Club on Monday. The series has taken an interesting turn as the hosts have started the T20I series by winning the opener. Earlier, India had pulled off a whitewash in the One-Day International (ODI) series and now Zimbabwe have made a good comeback starting the T20I series on a positive note. The Indian Team will be led by experienced MS Dhoni while newly appointed skipper Graeme Cremer will be the captain for the T20I series for the hosts. Full Cricket Scorecard: Zimbabwe vs India, 2nd T20, at Harare

India have played a lot of Twenty20 (T20) cricket lately and the recent defeat comes as a disappointment for the team. Though the match was neck-to-neck with India losing it by just a couple of runs, Zimbabwe’s intent has to be praised. In the first ODI, Mnaish Pandey impressed for India scoring a 35-ball 48 but bowlers failed to restrict the hosts within a low total. Jaydev Unadkat and Rishi Dhawan remained expensive and went on to give away too many runs.

For Zimbabwe, it was Elton Chigumbura lower the order who scored a match-winning 26-ball 54 who pushed the run to 170 and set the target high for India. The bowlers did a more sensible job than what they did in the ODI series. Chamu Chibhabha remained exceptional with the ball. Two of Zimbabwe’s major concerns before the second T20I will be Graeme Cremer’s form which is yet to be bettered and the injury of wicketkeeper-batsman Richmond Mutumbami which has made him uncertain for the rest of the series. 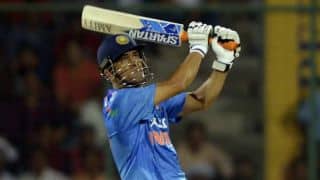