India ave entirely dominated in the series and have won it 2-0 against Zimbabwe already.

It is the third and final One-Day International (ODI) as India take on Zimbabwe at the Harare Spots Club on Wednesday. The visitors have entirely dominated so far in the series and have pocketed it 2-0 already. While the young Indian side led by MS Dhoni will look to whitewash a full strength Zimbabwe team, the hosts will seek resurgence and would like to regain respect of their fans with a win in the last game. The series is followed by a three-match Twenty20 International (T20I) series starting after a three-day gap. FULL CRICKET SCORECARD: India vs Zimbabwe 2016, 3rd ODI at Harare

Though most of India’s star players have been rested for the series, the young team has not let the absence felt by performing stupendously in the previous two matches. KL Rahul made history as he scored a century on his ODI debut in the first match, becoming the first Indian to do so. Ambati Rayudu also showed his experience and understanding of the game with sensible knocks in both the matches. Bowlers have also been successful. Jasprit Bumrah, Barinder Sran, Yuzvendra Chahal have been among the leading wicket-takers of the series. LIVE BLOG: India vs Zimbabwe 2016, 3rd ODI at Harare

Zimbabwe have failed to put up any significant performance either with bat or ball. The only mentionable knock from Zimbabwe’s side came in the second ODI from Vusimusi Sibanda as he scored a half-century much-needed for his team. Among the bowlers, Tendai Chakara has got a single wicket while Chamu Chibhabha and Sikandar Raza have bagged one wicket each in the series. 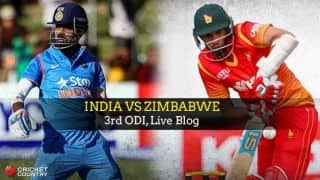