Statistical highlights of the fourth one-dayer between India and Zimbabwe in Bulawayo on Thursday. 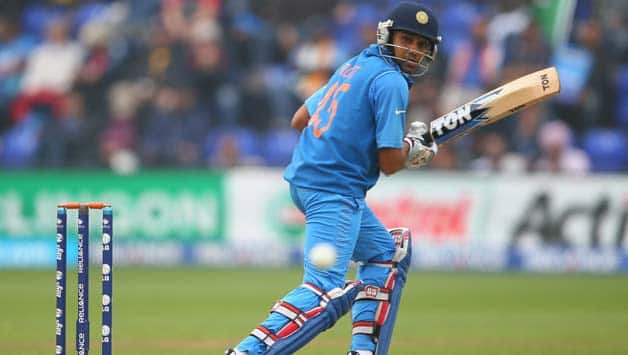 Statistical highlights of the fourth one-dayer between India and Zimbabwe in Bulawayo on Thursday.

# Rohit Sharma‘s first half-century vs Zimbabwe is his 18th in ODIs. He has posted his highest score vs Zimbabwe in the current bilateral series.

# Rohit enjoys an excellent record at Queens Sports Club, amassing 279 at an average of 279.00 in three innings, including two hundreds and a fifty. His excellent average is the highest by a player at this ground.

# Zimbabwe’s 144 is their lowest total against India in ODIs at Queens Sports Club, Bulawayo.

# India, with their nine-wicket win, have equalled their biggest victory in terms of wickets over Zimbabwe in ODIs in Zimbabwe.

# India have now won seven consecutive ODIs – one against the West Indies, two vs Sri Lanka and four vs Zimbabwe.

# Raina’s batting record in Indian victories is excellent – his tally being being 2792 (ave .50.76) in 85 innings, including two centuries and 23 fifties.

# Elton Chigumbura (50 not out) has posted his 15th half-century in ODIs – his first vs India in six matches.

41 runs apiece in four ODIs — a record for most wickets by an Indian bowler in a series vs Zimbabwe in ODIs.

# Raina and Rohit were associated in a second-wicket stand of 122 (unbroken) — India’s third century stand for the second wicket vs Zimbabwe at Bulawayo.

# Mohit Sharma (10-3-26-2) is now the second Indian player to have received the Man of the Match award on debut in ODIs.

# On his ODI debut vs Australia at MCG on December 6, 1980, Sandeep Patil had made 64 off 70 balls and bagged one for 31. He had rightly got the Man of the Match award in India’s superb 66-run triumph.